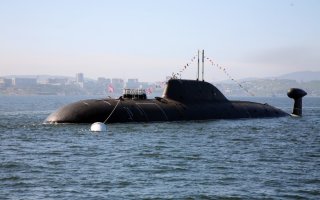 Here's What You Need to Know: This forthcoming submarine will no doubt be a terror in the deep.

Russia is officially working on their newest submarine, the Project 545 Laika, or Husky-class. Laika is a catch-all name for various breeds of hunting or pack dogs in Russia, somewhat similar to the Husky breed. The class was “revealed” during a Russian television broadcast, and was seen in the background of a display showing several new military projects.

The Husky-class seems to be somewhat similar to the Akula-class of submarines, especially the Husky-class’ sail which is quite low-profile, though somewhat more lengthened than that of the Akulas. According to the Russian state-owned TASS news agency, the Husky-class will “feature a modular configuration and a single integrated combat control system with artificial intelligence,” though what this means exactly is anybody’s guess. Probably a high degree of automation.

Despite the longer sail, the Laika’s will still have room inside the hull for launching ballistic missiles. Tass quoted a source from the St. Petersburg-based Malakhit Marine Engineering Bureau where the Laika’s are to be designed as saying that "Tsirkon hypersonic missiles will be among its strike weapons.”

The Tsirkon (sometimes alternatively written as Zircon or Zirkon) submarine-launch missile was test-fired in February 2020. Though details are scant, the missile is believed to be capable of flying at hypersonic speeds of Mach 6 or greater, and its range is over one thousand kilometers or over six hundred miles.

According to a provisional cutaway illustration, the Husky-class will probably have four missile tubes that can hold four missiles each, possibly a combination of land-attack and anti-ship missiles. Additionally, the class may have as many as eight missile tubes and a small sail-mounted short-range surface to air missile system.

The bow sonar array will offer a wide “viewing” range. Combined with port and starboard flank sonar arrays, and a retractable towed sonar array, the Husky-class will benefit from good visibility underwater. Nuclear propulsion is also to be assumed, giving the single-screw submarine virtually unlimited range.

Interestingly, the lower tail member is rather short, a possible indication that that class may be intended for use in littoral waters nearer to shore than larger ballistic missile submarines, as a smaller bottom control surface would be better protected from damage than a full-sized blue water tail assembly. The bow-mounted hydroplanes are likely retractable.

There have been indications that the Project 545 Laika will have a number of composite materials throughout, including the hull surface, control surfaces, as well as the propeller shaft and the propeller itself, though this is very difficult to verify.

In any case, Russia is off to a building frenzy. Unlike the United States Navy or Royal Navy, Russia favors a diversity of submarine designs. While inefficient from a construction standpoint, having a wide variety of submarines could allow for a wider range of missions to be achieved. Stay tuned for more.