Meet The USS England: The Warship That Sent The Most Submarines To The Ocean Floor 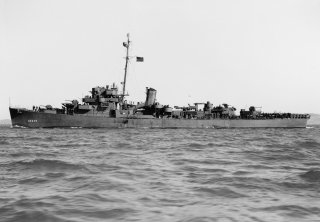 Here's What You Need To Remember: For almost 73 years, the USS England has set a record for most subs sunk by a single ship. That record remains unbroken.

Destroyer escorts were the econo-warships of the U.S. Navy in World War II. Designed to be smaller and cheaper alternatives to Navy destroyers, destroyer escorts weren't designed to slug it out in a fleet battle like their bigger brothers. Instead theirs was the dreary but vital duty of escorting convoys of slow merchant ships across the oceans.

Yet the world's record for sinking submarines belongs not to a destroyer or an aircraft carrier, but a humble destroyer escort. The USS England sank six Japanese submarines in just 12 days in May 1944.

At first glance, the England (named for John England, a sailor killed at Pearl Harbor) was not an impressive vessel. A Buckley-class destroyer escort, the England had a crew of 186 and weighed in at 1,400 tons, or about one-quarter less than a Fletcher-class destroyer. It only mustered three 3-inch guns rather than the 5-inchers of a destroyer, a dozen anti-aircraft guns instead of 20 or so on a Fletcher, and three torpedo tubes instead of 10. But as will be seen, the England bristled with anti-submarine weapons, including two depth charge racks that rolled depth charges off the stern of the ship, and eight K-guns that shot depth charges out to 150 yards. It also had a deadly British-designed 24-barrel Hedgehog anti-submarine mortar. The Hedgehog fired shells that looked like potato mashers; unlike depth charges, which exploded at a pre-set depth and disrupted sonar contact, Hedgehog grenades only exploded when they hit a hard surface such as a submarine hull.

The saga of the England began on May 18, 1944, when the England and two other destroyer escorts received orders to find a Japanese submarine reported heading toward the Solomon Islands in the South Pacific. On the afternoon of May 19, the England's sonar detected the submarine I-16.

What happened next is detailed in an account written by Captain John Williamson, who served as the England's executive officer during that time. In a March 1980 article in Proceedings Magazine, Williamson and co-author William Lanier describe the destroyer escort's baptism of fire. Four times the ship made attack runs over I-16 to launch Hedgehogs, which missed. The Japanese skipper cleverly tried to evade its pursuer by following the England's course and wake.

On the fifth run, the sub's luck ran out. Williamson recalls the crew cheering as they heard four to six Hedgehog hits. Then the England's “fantail was lifted a full 6 inches, then plopped heavily back into the water....We had, with cataclysmic certainty, heard the last of one Japanese submarine. Sobered, and more than taken aback by that final blast, we no longer felt like cheering. But we did stand a little straighter.”

Later that May, the Japanese Navy implemented Operation A-Go, which called for concentrating the Japanese fleet to ambush the Americans in a decisive battle. The plan included establishing a blocking line of seven subs northeast of the Admiralty Islands and New Guinea, across the expected path the Americans would take. The subs would give the Japanese early warning and then sink enough of the American battleline to affect the decisive fleet battle that would follow.

But after U.S. codebreakers deciphered the Japanese orders, the Americans decided that the England and her two companions would roll up the Japanese sub line from one end to the other. On the night of May 22, the USS George's radar picked up the RO-106 cruising on the surface, and illuminated the sub with its searchlight. The sub dived, only to run into the England conducting Hedgehog runs. The England obtained at least three hits, and observed wreckage bubbling to the surface.

On May 23, the RO-104 became the England's third victim, followed by the RO-116 on May 24. On May 26, a hunter-killer anti-submarine task force arrived, centered on the escort carrier Hoggatt Bay, which allowed the England and her two consorts to head to the port of Manus for resupply. On the way, the England sank the RO-108.

After taking on supplies, the destroyer escorts sailed back to what was left of the Japanese underwater picket line. On the early morning of May 30, the destroyer Hazelwood, escorting the Hoggatt Bay, picked up the RO-105 on radar. While several American ships hounded the sub, the England was ordered to stick to its own patrol area.

For almost 24 hours, the other U.S. ships hunted the RO-105, on which was sailing Captain Ryonosuka, the highly experienced leader of the Japanese Navy's Submarine Division 51. The sub managed to evade their attacks. Williamson recalls that the England offered to help and requested the location of the U.S. ships, only be told that “We are not going to tell you where we are. We have a damaged sub, and we are going to sink her. Do not come near us.”

By now out of air, the RO-105 surfaced between two of the American ships, which blocked each other's fire, then submerged again. Disregarding orders, the England headed to the vicinity, and was finally cleared to make its own attack. After surviving 21 attacks over 30 hours, the RO-105 was sunk by the England's Hedgehogs.

Two of the seven subs in the Japanese picket line had previously returned to port. The remaining five had all been sunk by the England.

Even while they basked in their triumph, some of the England's crew felt qualms.

After the RO-104 had been sunk, Williamson was on his way to the England's wardroom for coffee when a young seaman asked him how many men had been on that sub, and how he felt about killing them. Williamson replied that there were 40 to 80 crewmen, and that war is kill or be killed. “But, somehow, when I finally reached the wardroom, that cup of coffee didn't taste as good as I thought it would,” he recalled.

Admiral Ernest King, Commander-in-Chief of the U.S. Navy, had this to say about the destroyer escort's exploit: "There will always be an England in the U.S. Navy."

For almost 73 years, the USS England has set a record for most subs sunk by a single ship. That record remains unbroken.