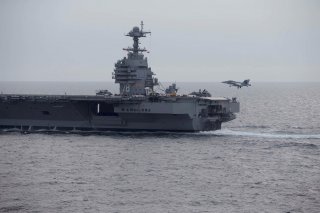 Here's What You Need To Remember: The major advances are in combat preparation, intelligence, and logistics - being able to quickly refuel jets and get them up in the air again.

It is a key step for the first-of-its-kind new carrier which has at times traveled upon turbulent seas on its way to ultimate deployment, due to cost overruns, delays and certain technological challenges with the integration of a large number of never-before-seen aircraft carrier systems.

“Recent underway periods have provided my staff and my warfare commanders a greater understanding of how Ford- and Nimitz-classes are similar and how they are different, but this underway will enable us to learn how we will fight the Ford-class,” Rear Adm. Craig Clapperton, commander, CSG-12, said in a Navy report. “This is another stepping stone to learn, synchronize, and coordinate with fleet stakeholders and mature our processes and capabilities to posture the ship and the strike group for success in their first workup and deployment cycle.”

The integrated cross-fleet operations represented the first time an entire Carrier Strike Group has operated together, a move that builds upon prior exercises on board the USS Gerald R. Ford with a Carrier Air Wing.

During the “cyclic operations” to prepare for maritime warfare, a Destroyer Squadron supported the USS Gerald R. Ford by working to defend against surface and undersea attacks.

Cyclic combat operations are of great value for how the USS Gerald R. Ford might function differently in a Carrier Strike Group when compared to the existing Nimitz-class. While much of the ship defenses, networking, weapons integration and aircraft coordination is likely similar between the Nimitz- and Ford-class carriers, there are some interesting, distinct differences made possible by new Ford-class technologies.

The USS Gerald R. Ford has been engineered with a larger flight deck space to enable a much larger sortie rate to increase mission op-tempo. Also, not only will more aircraft be able to operate from the flight deck of the USS Gerald R. Ford, but the operational pace will also be greatly impacted by the ship’s electromagnetic catapult and weapons elevator.

Carrier launched attack missions can reach a much faster and more intense operational pace by virtue of the USS Gerald R. Ford’s new electronic weapons elevators able to quickly refuel and rearm attack aircraft in between attack sorties. Sailors on deck will not need to manually travel to specific deck locations to refuel an aircraft but can rather much more efficiently bring up and integrate weapons to sustain a fast operations tempo.

Carrier Strike Group operations are also expected to change with the arrival of the Navy’s F-35C, as they will need to adjust to much greater levels of long-range attack, stealth, computer networking and drone-like ISR connectivity.