The Military Case for Building a New Cargo Fleet 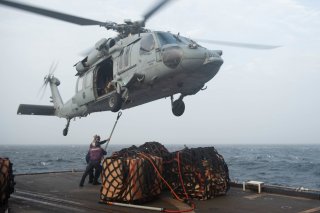 By virtually every measure—military power and reach, economic might, humanitarian assistance and science and technology—the United States remains today the world’s sole superpower. One area where this country has a significant advantage over any other nation, particularly potential adversaries, is in logistics. The real secret to the Defense Department’s global ability to move, supply, and support modern military forces rests in the support it receives from private sector cargo shippers. These same companies are critical to moving U.S. humanitarian assistance supplies to famine-ravaged countries and generally ensuring that U.S.-made products reach the far corners of the world.

Only a few decades ago, the United States possessed the world’s largest commercial cargo fleet. Today, that fleet has shrunk by more than 90 percent. While thousands of ships annually sail to and from U.S. ports every year, the overwhelming majority are now foreign-flagged vessels.

There are a handful of U.S.-based shipping companies that continue to operate, providing the nation with critical logistics capabilities. One of these is American President Lines (APL), the U.S. subsidiary of the global transportation giant CMA CGM. Another is Crowley Maritime. Both of these companies play a large role in moving both U.S. military cargoes and food aid purchased with government funds to overseas destinations. These companies play a very significant role in the multi-modal movement of goods across the United States and around the world.

Over the past several decades, even as the bulk of forward-deployed U.S. forces came home from their overseas bases, the military not only retained but improved its ability to conduct overseas operations, deploy joint forces worldwide and sustain them once deployed. No other nation on Earth has this ability. It is particularly significant to the operations of a military that is largely continental U.S.-based but tasked with multiple security responsibilities around the globe.

As a result, a significant fraction of the U.S. military’s Table of Organization and Equipment is now devoted to providing logistics and sustainment support to expeditionary forces. The U.S. Air Force operates some six hundred aerial refueling tankers and about the same number of transport aircraft. Military Sealift Command (MSC) routinely employs around fifty ships, a combination of government-owned/contractor-operated vessels and commercial transports under contract to meet its worldwide responsibilities. MSC was responsible for the rapid outfitting and deployment of the hospital ships Mercy and Comfort at the start of the coronavirus outbreak.

The private sector doesn’t just provide critical logistics and sustainment support to the military in times of war. A peacetime military requires enormous logistics support. The U.S. Navy needs to maintain both prepositioned logistics ships loaded with equipment and stores at several places around the world and the Ready Reserve Fleet. Private companies play a major role here. To maintain these fleets, the Navy relies on private companies.  For example, Crowley and its subsidiaries manage some twenty-four prepositioned ships for the U.S. Military Sealift Command and Ready Reserve ships under the U.S. Maritime Administration.

It is vital that this nation also maintain a fleet of U.S.-flagged, active, commercially-viable, militarily-useful and privately-owned cargo vessels, as well as the shipbuilding and vessel repair industry behind it. These vessels have been instrumental both in the projection of U.S. forces overseas and ensuring that they can be sustained once deployed. The availability of foreign-flagged cargo ships cannot be guaranteed at the times and places they will be needed. In addition, the owners of foreign-flagged vessels or the nations in which they are registered may refuse to accept charters from the Department of Defense.

An important tool for ensuring that there remains a U.S.-flagged cargo fleet is the Jones Act. This law, dating back to 1920, places restrictions on what is called cabotage, the movement of goods between U.S. ports and on U.S. waterways. It mandates that only U.S.-built and flagged vessels conduct this trade and that at least 75 percent of the crews on these ships be U.S. citizens. In addition, the Act restricts the foreign steel content of repair work on U.S.-flagged vessels to U.S. shipyards.

The Jones Act ensures the continuing existence and availability to the nation in time of need of a commercially-viable and modern U.S.-flagged cargo fleet. The companies engaged in cabotage are able to justify remaining in that business, plus the expense of periodic modernization of their ships because of the assurance of business provided by the Jones Act.

Without the Jones Act and cargo preference, the U.S. Navy would be required to spend billions of dollars on additional ships that would spend most of their lives tied up to a pier. The shipbuilding and repair industry on which the Navy also relies would shrink further, raising maintenance costs for military vessels. In addition, the pool of U.S. merchant mariners would all but disappear.