Military Exercises Prove That NATO Can’t Save Norway From Russia 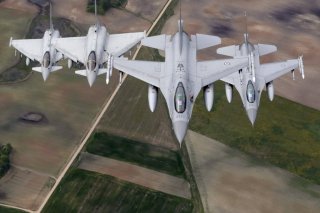 Here's What You Need to Remember: Critics point out that the Spearhead alone would stand little chance of holding back a full-scale mechanized invasion. However, the brigade’s role is essentially political. Were Russia to engage in a conflict with a NATO member, it would likely be to seize lightly populated states like the Baltics in two or three days before NATO can deploy reinforcement

On October 25, 2018, over fifty thousand military personnel braved chilly Scandinavian weather to begin Operation Trident Juncture—a massive exercise simulating a defense of Norway against land and amphibious invasion, and by some accounts the largest North Atlantic Treaty Organization exercise since the end of the Cold War.

Sailors, soldiers, and airmen from all twenty-nine NATO member states are participating as well as Finnish and Swedish forces, 250 military aircraft and sixty-five ships. The ten thousand land vehicles offloaded into Norway—ranging from Leopard 2 tanks to Amphibious Assault Vehicles, to ordinary trucks—would measure fifty-seven miles long if lined up bumper-to-bumper.

The exercise’s previous iteration in 2015 took place in the considerably warmer climate of Spain and Portugal. Now NATO is testing its logistical capacity mobilize tens of thousands of troops to its northernmost member—and signaling to Moscow its willingness to push back to displays of military force along its borders.

Norway last experienced an amphibious invasion seventy-eight years ago, when Nazi Germany overcame Norwegian defenders and the French, British and Polish forces dispatched to relieve them. However, the campaign cost the Kriegsmarine nearly half its surface warships. Today, Norway’s national-security strategy also has a concept of “total defense” in which civilian authorities are intended to play an integral role by providing logistics, supplies and medical services to the war effort.

The concern is focused on Norway’s 120-mile long land border with Russia, and the nearby Arctic coastline which happens to overlook the Russian Northern Fleet’s access to the Atlantic Ocean from its base in Severomorsk. In early 2017, Russian supersonic bombers deployed on mock attack runs targeting Norway’s Globus 2 radar in Vardø, followed by simulated raids in May against nearby NATO vessels and a Norwegian base in Bodø. Then during its Zapad military exercise, Moscow deployed a nuclear-capable Iskander tactical ballistic missile system next to the Norwegian border.

The nation of 5.3 million has only a single combined-arms brigade (though it has combat experience in Afghanistan) plus two battalion-sized garrison units. Norway’s air and sea forces are stronger: around seventy F-16 jets and F-35 stealth fighters, and seventeen ships in their navy evenly split between frigates, missile boats and submarines. Thus, the Trident Juncture plays a deterrence role by showing that should Norway invoke Article 5 in response to an attack, its NATO allies are willing and capable of coming come swiftly to its aid.

Russia has customarily complained about the exercise, claiming Norway’s hosting of foreign troops violates ‘traditions of good-neighborliness.’ Kremlin spokeswoman Maria Zakharova stated “irresponsible actions will inevitably destabilize the military and political situation in the north, increase tensions and undermine the fabric of Russian-Norway relations,” and that Russia would take “necessary ‘tit-for-tat’ measures” in response. Nonetheless, Moscow has accepted NATO’s invitation to have observers attend the exercises.

The participation of Sweden and Finland is also significant. Since the Cold War, Swedish forces have confronted Moscow’s submarines and aircraft in and over the Baltic Sea, but Stockholm has long resisted formally becoming a member of NATO. Helsinki is even more guarded in its neutrality. However, Moscow’s recent surge in aggressive submarine and bomber activity have caused both countries to invest in stronger defenses and draw closer to the American-led alliance. For instance, 2,200 Swedish and 2,400 Finnish personnel are participating.

Prior to the exercise between October 15 and 17, Marines on the Iwo Jima simulated an airborne assault landing using MV-22B Osprey tilt-rotors and CH-53 helicopters. Furthermore, Norway recently began hosting a rotating battalion-sized contingent of 770 U.S. Marines (currently, the 3rd Battalion/8th Regiment.) Russia has singled out this development in particular for criticism. The Marines have also secreted enough equipment for up to fifteen thousand more Marines in Norwegian caverns in case operational contingencies require their numbers to be scaled up.

Germany is the second largest contributor to the exercise, with ten thousand personnel and two  hundred armored vehicles, including twenty Leopard 2 tanks. The U.K. and France are deploying 2,700 and 3,000 personnel respectively, and Canada 2,200. Other members like Italy, the Netherlands and Spain are contributing between 1,000 to 1,500 personnel each.

The aerial component of Trident Juncture includes 250 aircraft based both in Norway and abroad. Finnish Rovaniemi Airbase is hosting Belgian and U.S. F-16Cs, while U.S. twin-engine F-15Cs air-superiority fighters are operating from the Swedish Kallax airfield, along with seven agile JAS-39 Gripen jets. German Tornadoes and Typhoons, Canadian and Finnish FA-18 Hornets, and French delta-wing Mirage 2000s are also among the participants.

The warplanes will practice air-to-air engagements as well as provide support for ground and naval forces. Hawk advanced jet trainers of the Royal Air Force’s 100 Squadron will serve as mock enemy “aggressors.” Meanwhile, U.S. KC-135s will provide aerial refueling and Atlantique 2 and Aurora maritime patrol planes will practice combing the seas for submarines.

The twenty thousand ground troops in Trident Juncture are divided into opposing division-sized teams. The Northern team will play the role of an invading power using Canadian and Swedish-led Brigades, as well as Norway’s lone brigade—supported by an amphibious landing by U.S. Marines. The Southern team, composed of German-, Italian- and British-led brigades, will first defend and then counterattack.

The exercise is being coordinated by Joint Forces Command Naples, though its commander, U.S. Adm. James Foggo, is operating closer to the action on the Blue Ridge-class command ship USS Mount Whitney. Once the maneuvers conclude November 7, the Head Quarters will then engage in a Computer-Assisted Command Post Exercise between November 14 and 23 intended to test the robustness of command and control systems.

Critics point out that the Spearhead alone would stand little chance of holding back a full-scale mechanized invasion. However, the brigade’s role is essentially political. Were Russia to engage in a conflict with a NATO member, it would likely be to seize lightly populated states like the Baltics in two or three days before NATO can deploy reinforcement, presenting a “fait accompli” and tempting politicians to back away from a fight—the outcome of a 2016 Rand war game. Theoretically, the Spearhead could serve as a mobile trip-wire, putting West European ‘skin in the game’ fast enough to avoid that scenario.

By 2020, NATO is aiming for the capacity to mobilize thirty mechanized battalions, thirty squadrons and thirty warships within thirty days. For now, though NATO planners will be satisfied if it can channel the tens of thousands of troops through the Nordic weather without major mishap—beyond the disorder imposed by having to clean the 727.5 tons of laundry NATO logisticians have calculated the exercise will generate. If they can handle that many muddy fatigues, then perhaps the alliance is up to the task of defending its northern flank.