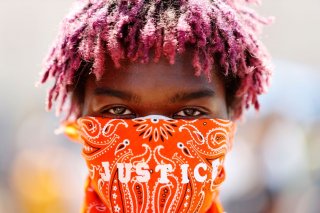 The scene was intense. Black residents of Minneapolis angered over an incident of police brutality fought with officers in the streets and set buildings ablaze. Many were injured; dozens were arrested. Eventually the National Guard, called in to patrol the streets, ordered black citizens back into their homes.

This may sound a lot like a scene from the past week, but it’s actually a flashback to 1967, when African Americans took to the streets of north Minneapolis after a series of abuses that, like today, culminated in days of unrest.

It took place in one of the “long, hot summers” of the 1960s, when black Americans in cities across the country protested and rioted over police abuse and segregation. While our history books remind us of famous riots in major cities like Los Angeles, Newark and Detroit, what took place in Minneapolis – where the black population back then was just 8% – is often forgotten.

I stumbled across this story while doing research on a book about the Minneapolis music scene and how it made Prince. With protests and riots taking place across the country to protest the murder of George Floyd, now’s a good time to revisit what happened in Minneapolis in 1967 – and why it represents a missed opportunity that laid the seeds for today’s unrest.

African Americans living in north Minneapolis in the 1960s faced the same problems of segregation, poverty and disinvestment that blacks in other American cities endured.

Frustration with the resulting marginalization as well as discriminatory Jim Crow laws led to a rippling series of urban uprisings in the U.S. in 1964. The unrest finally reached Minneapolis in 1966, when looting and arson took place on Plymouth Avenue, a major street in north Minneapolis.

One result of the tumult was black cultural centers began to spring up across the country, including in Minneapolis, where city officials helped establish The Way in the north of the city. The center became a space where local African Americans could hold community meetings, play sports and perform. Prince, who grew up in the neighborhood, practiced and performed there – and even played a little ball.

But it also became a place where blacks could share their stories of life in the city and organize themselves.

A week of unrest

The city’s response to unrest one year later was decidedly less accommodating.

On July 19, 1967, an altercation broke out between two teenage black girls at the city’s Aquatennial Torchlight parade. Nearby police trying to break up the scuffle between them threw both girls to the ground. When a young teenage black boy who witnessed the incident complained to the officer about the treatment of the girls, another officer struck him too.

News of what had happened spread quickly among black residents, and many gathered at The Way the next day to organize a protest in response. Later that night, black residents marched along Plymouth Avenue and demanded the officers be held accountable.

Police arrived. Tensions escalated. An officer struck a pregnant woman in the belly – she subsequently miscarried – and fights between residents and police broke out. Protesters threw rocks and set fires to buildings with Molotov coattails.

More cops were called, and more residents joined the ensuing fight. By the next morning, the protesters were causing havoc, prompting the city’s mayor, Arthur Naftalin, to call in the National Guard to squash the protests. Burned buildings, injured protesters and over 30 arrests marked the end of the protest four days later. No police officers were held accountable for their treatment of black citizens.

A tale of two responses

City officials, naturally, wanted to get to the bottom of what had happened in hopes of preventing another riot in the future. They did so in two ways.

The first was a public forum, organized by local religious leaders, that focused on listening to the grievances of the protesters and other residents. Protesters who attended made it clear that fatigue with police brutality was the main reason they marched and rioted.

“This will show them we are not going to take any more of the cops shoving and pushing us,” said one protester. Another explained the violence of the protesters was a normal response to social conditions. “You back a colored man into a corner and complain when he comes out fighting,” he said.

But in the city’s other response, officials came to a very different conclusion for what caused the unrest. The county impaneled an all-white grand jury to identify those who “perpetrated the crimes,” determine if there was a conspiracy and consider any “constructive decisions that would be helpful in the future.”

From the start, the prosecutorial nature of the grand jury made it feel like officials were ignoring the community’s call for a different model of policing, one that takes black safety and the value of black life seriously.

Moreover, the grand jury’s report, in addressing whether there were any “constructive decisions” that could prevent a recurrence, disregarded the community’s claims of brutality as the impetus for the uprising.

“No weapons were fired by authorities,” the report claimed, though a young black man was rushed to the county hospital with a gunshot wound. “And there is no evidence of so-called ‘police brutality.’”

The grand jury recommended The Way and its staff be investigated for inciting the disturbance. Finally, the report concluded that more beat police patrolling “certain areas” like north Minneapolis would help to better establish positive connections between police and communities of color.

And so, by ignoring the voices of the black community and their calls for change and accountability – and instead doubling down on the kind of policies that caused the problems – the city of Minneapolis squandered an opportunity to improve relations between black citizens and the police. Floyd’s murder by a Minneapolis police officer on May 25 is a consequence of this public policy failure.

As Americans grapple with how to respond to today’s unrest, I hope they don’t make the same mistake they did in 1967.