Minneapolis Might Want to Get Rid of the Police, But Crime Is Spiking 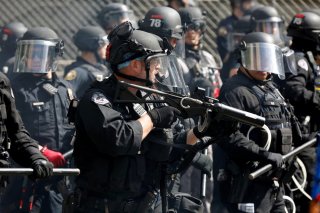 At the end of June, the Minneapolis City Council voted unanimously to “defund” the city’s police. Now crime is on the rise.

John Hinderaker, president of the Minnesota policy organization Center of the American Experiment, joins the show to explain what the future may hold for the Minneapolis Police Department and what his organization is doing to support local law enforcement.

Virginia Allen: I am joined by John Hinderaker, president of the Center of the American Experiment, a prominent think tank just outside of Minneapolis, Minnesota. John, thanks so much for being here today.

John Hinderaker: Hey, happy to do it.

Allen: Before we get into what is happening on the ground in Minneapolis, in the wake of George Floyd’s death, could you just take a minute to briefly explain what the Center of the American Experiment does? What is really your primary mission?

Hinderaker: We are a policy organization, conventionally referred to as a think tank. We are the conservative policy organization in Minnesota. We’re very aggressive for a think tank. We put up billboards. We put ads on the radio. We write a ton of op-eds. We’re very active all over the state of Minnesota, as we try to swing public opinion to the right.

Hinderaker: It’s ridiculously left-wing—not to sugarcoat it. Minnesota is like so many states, where there’s a sharp divide between urban and rural. The Twin Cities metropolitan area is generally pretty liberal, and in greater Minnesota, the rest of the state is conservative and getting more conservative all the time.

Within the Twin Cities Metro, the city of Minneapolis itself is really left-wing. You could compare it to Seattle and Portland. This is [Rep.] Ilhan Omar’s district. She represents Minneapolis and some first-tier suburbs. So that’s the basic landscape, that the suburbs are swing territory, but those cities of Minneapolis and St. Paul are really on the left.

Allen: So May 25, George Floyd is killed by a police officer. And wow, it does not take long at all before there are literally cries in the streets from protesters and rioters demanding that the Minneapolis Police Department be defunded. And at the end of June, the City Council did vote unanimously to defund the police department.

But what exactly does that mean? I mean, surely that doesn’t mean that all of the law enforcement in Minneapolis just goes away overnight. I mean, can you explain a little bit about what that vote actually changed in the city of Minneapolis?

So this resolution that they passed is intended to sort of take steps in that direction via an amendment to the Minneapolis City Charter, which its proponents wanted to have on the ballot in November.

There’s something called the Minneapolis Charter Commission. And so this resolution went to them, and just a day or so ago, they voted, I think, 10-to-5, not to put this issue on the ballot for November. And apparently they’ve just got broad discretion to say, “No, we’re not going to do that.”

Hinderaker: I think their hope is that things cool down and that nothing really stupid happens.

Allen: So as of right now, it’s not like police are being laid off and sent home?

Hinderaker: Well, actually, that’s a great question too, because what is happening is that police are retiring. Police are going on disability. The city canceled an incoming class of trainees, so apparently that’s a year’s worth of police officers that won’t be brought on board. And the effective police force in Minneapolis, I believe, has now dropped below the level that is mandated by the City Charter. So where that goes from here, we really don’t know.

Allen: What are the locals saying? Is kind of the tone that you’re getting from most of the people in Minneapolis like, “Yes, this is good. The police department should be smaller. We should cut off funding”? Or are they kind of saying, “Wait a second. When I call 911, I actually want someone to be on the other end of that call”?

Hinderaker: Yeah. Well, it depends where in Minneapolis you live. If you live in the wealthy southwestern part of the city, for example, you probably have got a Black Lives Matter sign in your yard and are happy to talk about defunding the police.

If you’re one of the black residents in North Minneapolis, you’re probably clamoring for more police support. Those are the people who know that they need the police. They need them in their neighborhoods, and they want more policing, not less.

But let me just add this too, Virginia, because one of the things that my organization, Center of the American Experiment, does is quarterly polling in Minnesota. And we’ve polled these issues, these police issues, rather extensively. And what we find is that about 85% of Minnesotans support their local police department.

We phrase that a couple of different ways, but that’s a fair paraphrase. About 85% statewide support their local police department. They certainly don’t want to defund it. But the two places in Minnesota where that’s not true, where our police departments really don’t have majority support, are the cities of Minneapolis and St. Paul. So you do have some kind of eccentric ideology there that really is anti-law enforcement.

Allen: And crime-wise, what is happening in those cities right now?

Hinderaker: Oh, crime has jumped. I mean, if you see a map, somebody has been maintaining a map with a yellow dot on it wherever there’s an episode of gunfire occurring within the city limits of Minneapolis, and it’s unbelievable. I mean, the city is practically covered in yellow dots. Homicides are up. Violent crime is up. Nonviolent crime is up, as you would expect.

This was called the Ferguson effect, when it happened following the riots in Ferguson, Missouri, and now it’s the Minneapolis effect. When you have this kind of broad attack on law enforcement, police officers understandably pull back, and they don’t do as much discretionary work. And so stops of all kinds—traffic stops, stops on the street—are down by 70%, 80%, 90%. And when that happens, you inevitably will see a spike in the crime rate.

Allen: How are city leaders responding to that? Do they recognize this is a problem, and we need to actually do something, and begin supporting our police department again?

Hinderaker: It’s really interesting because for the last 40 years, every single person who has had any responsibility for the Minneapolis Police Department has been a Democrat. And that’s true today.

Jacob Frey, the boy mayor, I call him, he’s like 36 or 37, something like that, of the city of Minneapolis, is on the outs with the far left right now because at a big public gathering he said that he was not in favor of disbanding the Minneapolis police force. Which is, I think, the only sane position you can take. He was booed off the stage—

Hinderaker: … and has fallen into disfavor with the far left. So that’s kind of where it sits.

Allen: Wow. So you all at the Center of the American Experiment, you’ve stepped up, you’ve said, “We want to give voice to kind of the other side of this debate.”

So you all put up 38 different billboards around the city, which feature quotes from local media reports on the violent attacks that have taken place in your community, really just since the end of May. Can you explain a little bit about why you all chose to set up those billboards?

Hinderaker: Yeah, sure. As you say, there’s 38 billboards. Some of them are simple and just say, “Support our police,” with the URL supportmnpolice.com, where you can sign a petition and get a lot of information. And some, as you said, most of them have got like a quote from the local newspapers or radio stations about the violence.