Misogyny in the Capitol: Many of the Insurrectionists Don't Like Women 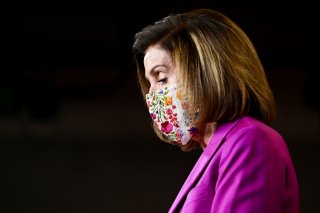 Among the various forms of violence on display during the U.S. Capitol insurrection, one has been largely overlooked: misogyny, or hatred toward women. Yet behaviors and symbols of white male power were striking and persistent features of the riots.

Members of the overwhelmingly male crowds defending a president well-known for his sexist attacks, embraced male supremacist ideologies, wore military gear and bared their chests in shows of masculine bravado. They even destroyed display cabinets holding historical books on women in politics.

Actions targeting House Speaker Nancy Pelosi give the clearest illustration. Members of the mob broke into her office and vandalized it. Items like mail, signs and even her lectern proved to be particularly popular trophies – symbolizing an attack on Democrats and the House Speaker, but also against one of the most powerful women in American politics.

‘Nancy, Bigo was here you bitch’

While partisan differences often drive political violence, misogyny can play an underappreciated role, especially when directed at women in prominent leadership positions. Misogyny punishes women who fail to live up to patriarchal standards, like those who dare to participate in the supposedly “male world” of politics.

In my new book, “Violence against Women in Politics,” I illustrate what this problem looks like around the world. In addition to physical harm, such violence can include threats, property damage and sexist rhetoric and imagery intended to intimidate women and delegitimize their political participation.

Attacks on Pelosi, while partisan in nature, also contained many elements of misogyny.

Pelosi was in physical danger as pro-Trump rioters roamed the Capitol building hunting down elected officials. News cameras filmed a man carrying zip-tie handcuffs entering and then exiting the speaker’s office, where members of her staff remained barricaded in a room for more than two hours.

Acts of vandalism and theft were accompanied by speech disparaging and belittling Pelosi as a woman. In the hallway outside her suite of offices, angry rioters tore the leadership nameplate off the wall as crowds chanted, “Get her out!”

In a video, a woman claimed she helped break down the door to Pelosi’s office. Once inside, “somebody stole her gavel and I took a picture sitting in the chair flipping off the camera.” She proudly announced “and that was for Fox News” – a station notorious not just for its far-right politics, but also for its on- and off-camera sexism.

A photo of Richard “Bigo” Barnett, sitting with his feet up on a desk in Pelosi’s office, solicited perhaps the strongest reaction. One feminist writer asked, “Have you ever seen a clearer photo of arrogant male entitlement? The legs apart, the foot on the desk, the smile … this guy isn’t just happy he’s broken into the Capitol building. He feels like he’s putting a woman in her place by violating and defiling her space.”

Consistent with this interpretation, Barnett later told a reporter: “I wrote her a nasty note, put my feet up on her desk, and scratched my balls.” The message read: “Nancy, Bigo was here you bitch.”

Another paper left on the desk amplified this message, warning in red ink: “WE WILL NOT BACK DOWN.”

Violent restoration of a retrograde world

Gendered slurs similarly appear in one of the first cases pursued by the FBI stemming from the riot.

Cleveland Meredith was charged with unregistered possession of firearms and unlawful possession of ammunition. FBI agents also discovered misogynistic text messages on his mobile phone threatening violence against Pelosi, like “Thinking about heading over to Pelosi C**T’s speech and putting a bullet in her noggin on live TV,” “I’m gonna run that C**T Pelosi over,” and “Dead Bitch Walking.”

Misogyny in the Capitol attacks indicates that rioters, both male and female, did not simply wage an assault on democratic institutions. They also sought to violently restore a retrograde world in which men, especially white men, hold all the power.