Missile Barrage: This Is How the F-35 Fighter Unleashes Hell 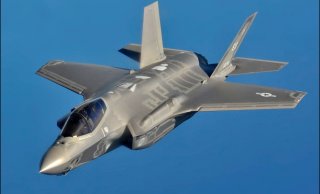 Here's What You Need to Remember: The F-35's beast mode boasts a whopping maximum of fourteen AIM-120 missiles and two smaller AIM-9X missiles for air missions, or six GBU-31’s along with four AIM-120’s/9X’s for ground missions.

This article was originally published a few years ago and is being reposted due to reader interest.