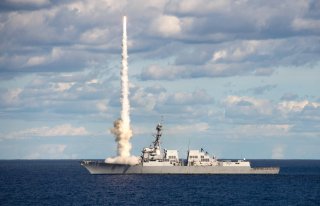 Here's What You Need to Know: Before the 1980s, missile launchers could fire one or two missiles at a time, which then had to be slowly reloaded from the ship’s magazine. Having a hundred or more missiles in VLS cells ready to fire vastly increases a ship’s firepower, though reloading the cells is a problem (the U.S. Navy is looking for ways to reload VLS cells at sea).

Europe’s navies are falling behind when it comes to anti-aircraft warfare.

The problem? European warships don’t carry as many missiles as their American and Asian counterparts. More specifically, their vertical launch systems (VLS), which consist of dozens of cells that each contain a missile, don’t have as many cells as the VLS on U.S. and Asian warships.

“One striking differential in terms of European navies’ capabilities concerns VLS capacity,” writes Nick Childs, a researcher for the London-based International Institute for Strategic Studies. “Most European platforms are built around a maximum forty-eight-cell VLS capability for their principal weapons systems. U.S. ships accommodate at least ninety cells, rising to 122 on the Ticonderoga. Japan’s ships likewise sport some ninety cells, while South Korea’s latest ships have eighty. The PLAN’s [Chinese navy’s] Type-052Ds host sixty-four cells for their principal weapons and the Type-055s 112. Clearly, such numbers have significance in terms of being able to sustain operations in a high-intensity confrontation. Given the difficulties of resupply, particularly at sea, it also has implications for those European navies, particularly the British and French, contemplating long-range deployments, such as to the Indo-Pacific.”

Childs dates the advent of the U.S. Navy’s Aegis air defense system in the 1980s as a turning point. “It comprised phased-array radars and an integrated combat system, as well as better surface-to-air missiles, to improve processing, reaction time and channels of fire, and to provide an extended engagement envelope. Shortly after, as a further significant enhancement, came the introduction of the multiple-cell vertical launch system (VLS) in place of trainable twin-arm missile launchers,” he notes.

Asian navies have chosen to follow the U.S. model of Aegis ships packing numerous VLS launch cells. “The most significant recent advances, however, have been in Asian navies,” says Childs. “This has included the introduction into the navies of Japan and South Korea (and soon also the Chinese People’s Liberation Army Navy (PLAN), in the shape of the Type-055) of vessels in the cruiser class, at 10,000 tons or more full-load displacement, rivaling the US Ticonderoga-class cruisers in size.”

Nor is it clear if China’s Aegis equivalent is as good as America’s. “On the face of it, these are highly-capable units, although there are still question marks over the performance of their combat systems, radars and weapons relative to, for example, the latest baseline Aegis systems,” Childs notes.

Russia is replacing multiple VLS models with a single universal VLS that can be fitted to different classes of warships, including cruisers, corvettes and submarines. However, Russian critics warn that a planned supersized version of the Kalibr cruise missile won’t fit in existing VLS cells.

There is no doubt that VLS has significantly changed naval warfare. Before the 1980s, missile launchers could fire one or two missiles at a time, which then had to be slowly reloaded from the ship’s magazine. Having a hundred or more missiles in VLS cells ready to fire vastly increases a ship’s firepower, though reloading the cells is a problem (the U.S. Navy is looking for ways to reload VLS cells at sea).