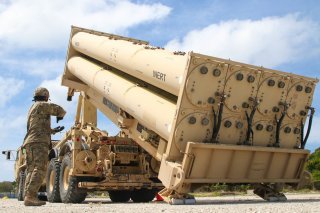 Here's What You Need to Remember: Thanks to the death of the Intermediate Nuclear Forces Treaty, a new arms race is heating up. And although new and cutting-edge missile technology like hypersonic missiles take up the lion’s share of headlines, this latest arms race is no less important. The times—in terms of arms control—are changing.

The Army awarded a $339.3 million contract to Lockheed Martin to design and develop a mid-range, ground-based missile. The missile, tentatively called the MRC, is intended “to hit targets in the range between the Precision Strike Missile, and the Long Range Hypersonic Weapon.” Both missiles are also built by Lockheed Martin.

Lockheed Martin’s contract award includes a “MRC prototype, consisting of launchers, missiles, and a battery operations center,” and could arrive in Army hands as early as 2023.

The company, one of America’s most storied aerospace companies, will get the MRC missile into Army hands so quickly thanks to adapting existing missile components for use on the MRC platform. A U.S. Army statement announcing the contract award reads as follows:

“In order to accelerate fielding to meet the FY23 timeline, the MRC prototype will utilize and modify existing hardware and software from the Army and joint service partners, and integrate additional technologies to achieve new operational effects. Following a broad review of joint service technologies potentially applicable to MRC, the Army has selected variants of the Navy SM-6 and Tomahawk missiles to be part of the initial prototype. The Army will leverage Navy contract vehicles for missile procurement in support of the Army integration OT agreement.”

The Lockheed Martin-designed missile would be used to support Army objectives in so-called multi-domain operations—“to use strategic fires to penetrate and disintegrate enemy layered defense systems, creating windows of opportunity for exploitation by the joint force.”

Though not explicitly mentioned in the U.S. Army announcement, this initiative is a product of the recent breakdown of the Intermediate Nuclear Forces Treaty, an document signed by the United States and the Soviet Union near the end of the Cold War.

The 1987 agreement limited the range of ballistic and cruise missiles that the United States and the Soviet Union were allowed to have in service, in an effort to reduce tensions between the world’s two most prolific nuclear powers. Since the United States allowed the treaty to lapse in 2019, an intermediate-range arms race has escalated.

It’s not the first piece of new American hardware pushing the envelope either. The Marine Corps is working on fielding a land-based variant of the Navy’s Naval Strike Missile that the Corps would like to see mated to driverless Joint Light Tactical Vehicle (JLTV) trucks.

Rather than being pointed east toward Russia however, the NSM would be used on rugged, far-flung islands in the South China Sea area to take out Chinese naval ships, forcing the People’s Liberation Army Navy farther out to sea. The Naval Strike Missile’s range is about 185 kilometers, though the USMC would no doubt like to increase that number as much as possible.

Thanks to the death of the Intermediate Nuclear Forces Treaty, a new arms race is heating up. And although new and cutting-edge missile technology like hypersonic missiles take up the lion’s share of headlines, this latest arms race is no less important. The times—in terms of arms control—are changing. Watch this topic for further future information.