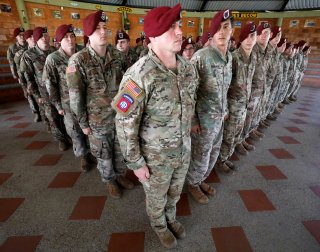 Here's What You Need To Remember: Most of these operations combine an excessive degree of military optimism about the parameters of possibility with a lack of political understanding of the risks and costs of failure. But these problems are not incidental to the special-operations-force paradigm; high-human-capital individuals tend to have a strong sense of their capabilities, and a strong belief in their ability to get tough jobs done. And civilians lacking in military expertise often have reason to take these beliefs at face value, especially when the SOF offer quick, easy solutions to knotty problems.

In his new book Oppose Any Foe, Mark Moyar turns a critical eye on the history of U.S. special forces, taking seriously the costs that developing such units imposes on the rest of the military, and taking account the strategic limitations of special operations. Moyar argues, among other things, that the glamor and undeniable heroism of special operators has helped deflect scrutiny of some of their more egregious failures, and of the special-operations enterprise as a whole.

The Raiders quickly lost the element of surprise, but nevertheless managed to inflict some casualties on the defending Japanese. The commander, Evans Carlson, decided that the remaining Japanese resistance was too stiff to accomplish the main objectives, which included the destruction of radio sets. However, the unit’s efforts to leave the island were stymied by high seas; only a small contingent were capable of swimming back to the waiting submarines.

On November 25, 1950, as part of the broader U.S. offensive into North Korea, the Eighth Ranger Battalion, a unit established in August, was assigned the job of capturing and defending Hill 205, along the Chongchon River. Unbeknownst to the Americans, regular Chinese forces had infiltrated North Korea in great numbers, and were preparing to launch a major counteroffensive.

But in those three days, U.S. special operators ran into a host of problems. Insufficient appreciation of the weather led to the drowning of four Navy SEALs on the night of October 23; an air assault on Richmond Hill prison faced unexpected fire from antiaircraft batteries, after a delay left the Black Hawk helicopters flying in daylight; an effort to seize an empty barracks on October 27 led to the crash of three helicopters and the death of three Rangers.

All in all, thirteen of the nineteen U.S. dead from the Grenada invasion were special operators. Commanders blamed the difficulties on poor communications, and on a poor understanding by conventional officers of SOF capabilities. The problems in Grenada helped drive reform not only of the special-operations forces, but also of the military as a whole; the framers of the Goldwater-Nichols Act of 1986 paid special attention to the difficulties that the invading forces faced.

The United States entered the Somali civil war under the aegis of a humanitarian mission, designed to restore food supplies to the greater portion of the civilian population. Before long, however, U.S. goals expanded. It didn’t help that a transition from President George H. W. Bush to President Bill Clinton left created political incoherence; Clinton had little foreign-policy experience, and an unclear notion of precisely what outcomes he wanted in Somalia.

On October 3, 1993, in an effort to apprehend the top lieutenants to the warlord Mohammed Farah Aidid, a group of U.S. Rangers and Delta Force operatives attempted a combined air and ground raid against targets in central Mogadishu. Both prongs of the operation quickly went wrong; the ground vehicles struggled to find their way to the target area, while one of the helicopters crashed after taking a hit from a rocket-propelled grenade. The ensuing melee lasted most of the night, and resulted in the crash of another helicopter, the loss of nineteen American operators and the death of upwards of a thousand Somalis.

The value of special-operations forces lies in its human capital. When these units take casualties, they cannot easily replace losses; each individual operator represents years of intensive training, along with a rare set of physical, mental and emotional traits. But unfortunately, shrapnel and plane crashes do not respect human capital. When special operators are pushed into conventional tactical situations where they cannot leverage their capabilities, they suffer and die like any other soldier. And in these cases, the loss to the country is immense, not only because of the political importance of specific operations, but also because of the loss of some of America’s finest warriors.