The Mk 47 Grenade Launcher is the Stuff of Nightmares 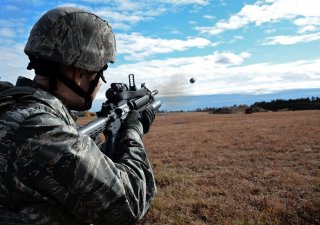 Here's What You Need To Remember: What separates the Mk 47 from other automatic grenade launchers (AGLs) is its laser rangefinder and programmable airburst grenades. It is a lightweight AGL that also features an advanced video sight and Nammo’s programmable 40mm HE projectiles, which are programmed in the breech of the weapon via three electrical contact points.

Due to the need to program the round in the breech before firing, the Mk 47 fires from a closed bolt as opposed to the open bolt used by the Mk 19. This increases the accuracy but decreases the practical rate of fire. The increased accuracy gives the Mk 47 the ability to engage single targets with precision at a distance, in a demonstration, a SADJ writer was able to put grenades through single windows at 250m after minimal training on the system.

A controversial video of combat footage in Afghanistan may provide some answers. In the video, the Mk 47 is largely seen mounted to vehicles, where its weight advantage is less relevant. In some shots, the Mk 47 is being fired with backup ladder sight used to aim, with the LVS pushed to the side. Other shots show the Mk 47 being used to engage the target through the LVS.