Mongolia Has Conquered Coronavirus, But It's Economy Is Paying The Price 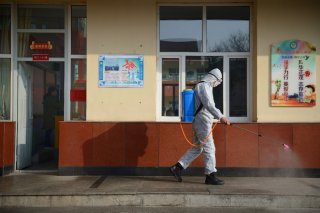 Mongolia has achieved notable success in protecting the health of its citizens and preventing the community spread of COVID-19. As of mid-August 2020, Mongolia had experienced no deaths from COVID-19 and 300 cases, all imported. Mongolia’s containment strategies allowed the country to re-open businesses internally and hold a successful national election. But its success has come at a price, as the country is now struggling to restart its export-driven economy and deal with mounting international debts.

Mongolia began health screening of travellers in late-January and halted all international flights and trains by early March when its first case was discovered. Mongolia requires that anyone arriving from abroad undergo testing, spend three weeks in a government-monitored quarantine facility and then two additional weeks in self-quarantine. In February, the country sharply curtailed Lunar New Year celebrations, and July’s Naadam festival was held without spectators.

Mongolia’s strict measures paid off — there has been no community transmission of COVID-19 in the general population. More than 60,000 Mongolians have returned from abroad since the start of the pandemic. Approximately 300 of these returnees, mostly from Russia, have tested positive. 289 have recovered with no deaths recorded. Most businesses in Mongolia reopened in May, including restaurants, hotels and holiday resorts. Mongolia’s isolation and small population have helped the country stop the spread of COVID-19, but there are concerns that relaxing travel restrictions could lead to a surge in cases.

Life and economic activity within the country have largely returned to normal, but the border closures and global economic slowdown have severely impacted Mongolia’s economy. In the first six months of 2020, Mongolia’s GDP fell 9.7 per cent, exports fell by over 40 per cent and the government deficit rose to almost 10 per cent of GDP as revenues fell and expenditures rose to address the pandemic. Mongolia’s exports are dominated by natural resources including coal, copper, oil and agricultural products hit by falling international demand.

Mongolia’s most important mining project, Oyu Tolgoi — a massive underground copper and gold mine being developed by Rio Tinto — was already facing delays and cost overruns due to technical issues and disputes with the Mongolian government, which holds a 34 per cent share. Copper exports from the operating part of the mine have been delayed due to border closures. Travel restrictions have also prevented the rotation of key personnel, creating more uncertainty and delays for the project that is now not expected to come online until 2023. Mongolia’s herders in rural areas have also been impacted as demand for their main product, cashmere, plunged during the key early-spring buying season.

Mongolia’s economy is tightly tied to China, where the country sends more than 90 per cent of its exports. While steps have been taken to reopen the border to trade, COVID-19 precautions and market disruptions have resulted in an ongoing reduction in exports. Concerns have been raised about Mongolia’s government debt levels which have risen to 77 per cent of GDP.

The IMF warned that Mongolia faces longer term economic risks due to high government and private debt levels, a heavy reliance on natural resource exports and uncertainties in global economic recovery. Mongolia has already tapped into international aid from the Asian Development Bank, the World Bank and the IMF to cover its short-term government financing needs. But the country risks debt distress if the economy is unable to recover in the near future.

Mongolia held its scheduled parliamentary elections on 24 June 2020. The election campaign period was shortened and public gatherings were restricted due to COVID-19, but Mongolia was able to learn from South Korea’s experience and held the election with minimal disruptions. The success of the government in controlling COVID-19, an electoral system that favours major parties and voters’ desire for political stability helped the ruling Mongolian People’s Party (MPP) win 62 of 76 seats.

The pandemic was not a major issue in the election as all parties and candidates pledged to maintain strict controls. The most important related issue concerned the more than 10,000 Mongolian citizens living in other countries who wanted to return to Mongolia. Some candidates supported restricting these flights to prevent passengers from bringing COVID-19 into Mongolia, while others urged the government to speed up repatriations and allow as many Mongolians as possible to return. The overwhelming victory of the MPP ensured that repatriation flights will continue, with 4000 Mongolian’s expected to return in August 2020.

Mongolia has achieved success in its public health response working closely with neighbouring countries and global organisations. China, South Korea and Japan have all provided Mongolia with donations of equipment and expertise, and in late-February Mongolian President Khaltmaa Battulga was the first foreign head of state to visit Chinese President Xi Jinping after the start of the pandemic.

The country’s success also illustrates the challenges it faces due to its isolation and its economic dependence on global markets and other countries, especially China. Mongolia’s high debt levels will limit the new government’s ability to offer programs to reduce the social and economic effects of the pandemic and leave the country vulnerable to a prolonged global economic slowdown.

Mendee Jargalsaikhan is a postgraduate research scholar at the Asia Pacific Foundation of Canada and a director at the Mongolian Institute for Innovative Policies.