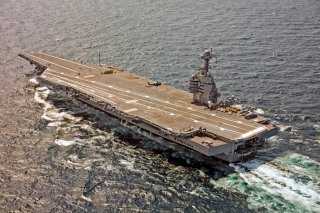 Here's What You Need to Remember: The Navy has explored torpedo defense systems for the Ford-class, possible laser interceptors, and of course a growing sphere of EW, cyber kinetic ship defenses such as missiles and guns.

Beneath the more visible surface of the USS Gerald R. Ford aircraft carriers’ continued journey to deployment, there appears to be a concurrent and highly impactful, yet more narrowly focused or specific developmental trajectory lurking below the radar: increasing the Ford-class’ expanding role as an armed warship capable of engaging in heavy maritime combat.

Of course, the Ford-class will primarily operate to transport, arm, and support its carrier air wing as a massive, power-projecting attack platform, yet at the same time, the Navy seems to be taking special measures to enhance its weapons, defenses, and direct engagement warfare technologies to a greater extent than previous carriers.

The Navy has just completed the lengthy and detailed 18-month Post-Delivery Test and Trials phase of operations (PDT&T) phase, a series of warfare preparation steps for the ship as it nears deployment.  Part of the process includes combat systems qualification testing during which carrier crew members operated weapons during live-fire exercises. Details regarding the weapons engagements suggest that Navy developers are stepping up technical and strategic efforts to arm and equip the Ford-class carriers as warships capable of major maritime combat on the open ocean.

“During the culminating live-fire exercise, the crew destroyed rocket-propelled drones capable of speeds in excess of 600 miles per hour; towed drone units that simulated incoming rockets; and remote controlled, high-speed maneuvering surface targets,” a Navy report on the Ford stated.

While carriers have historically been equipped with various self-defense combat systems, Ford-class developers appear to be taking a more pronounced offensive and defensive weaponry and warfare preparation approach for a platform historically thought of almost purely as an aircraft delivery system or floating airfield.

In more recent years, and particularly with the Ford-class, the Navy has expanded the weapons and defenses typically integrated into carriers by going beyond previous levels. For example, the Navy has explored torpedo defense systems for the Ford-class, possible laser interceptors, and of course a growing sphere of EW, cyber kinetic ship defenses such as missiles and guns.

There are many likely reasons for this, some of which may pertain to the seriousness of the current global threat equation as well as emerging areas of strategic focus for the Navy. For instance, carriers often travel in Carrier Strike Groups for clear purposes as nearby Destroyers and Cruisers armed with Vertical Launch Systems, interceptor missiles, and extremely sensitive missile defense radar can protect and shield carriers from attack. This will likely remain the case for obvious reasons, yet at the same time, the Navy’s Distributed Maritime Operations strategic thinking calls for more disaggregated and therefore less condensed operations. Spread out assets, leveraging newer, long-range sensors and large numbers of air and surface unmanned systems, present less of a target for enemies seeking to fire upon and destroy groups of more condensed or aggregated manned ships.

Furthermore, newer kinds of networking, coupled with several paradigm-changing long-range weapons and sensors, can both sustain connectivity yet conduct more dispersed operations, enabling the service to expand its geographical area of operations, cover more territory and ocean and expand possible methods of attack. This means carriers may operate in fewer groups and increasingly conduct more spread out missions with greater degrees of autonomy, a circumstance which therefore presents a need for more organic, or built-in defenses and offensive weapons should they encounter enemy attacks.