Nancy Pelosi's Proposal for Presidential Disability Is Flat Out Wrong 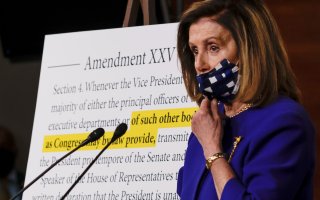 Speaker of the House Nancy Pelosi, together with Rep. Jamie Raskin (D-MD), held a press conference on Friday to introduce a bill to create a new body with an unwieldy name: the Commission on Presidential Capacity to Discharge the Powers and Duties of Office. Widely perceived as a largely symbolic action to highlight President Trump’s muddled handling of his recent COVID-19 diagnosis, this bill would invoke Congress’s power under the Twenty‐​fifth Amendment. In spite of the obvious timing, Pelosi insisted this bill is not about the current president. Raskin has proposed similar legislation earlier in Trump’s term, and the idea has come up sporadically over the decades.

President Trump’s fitness and immediate politics aside, is this bill a good idea? First, it’s important to understand the mechanics of the Twenty‐​fifth Amendment. Among other provisions, this amendment—passed in the wake of the Kennedy assassination and previous presidential health crises—allows the president to temporarily transfer power to the vice president, correcting a dangerous oversight in the original Constitution. This provision, in Section 3 of the amendment, has been invoked on occasion when presidents underwent medical procedures requiring sedation.

Section 4 is designed to handle the possibility of a president who is incapacitated before he or she is able to voluntarily transfer power. This requires invocation by the vice president, who together with “a majority of either the principal officers of the executive departments [i.e. the Cabinet] or of such other body as Congress may by law provide” may transfer power. The amendment then sets up a procedure for Congress to decide the matter if the president disputes his claimed inability.

Since the Twenty‐​fifth Amendment was ratified, Congress has never provided for “such other body,” leaving the decision with the fifteen members of the Cabinet. Raskin’s bill would change that by creating a bipartisan commission consisting of a mix of medical professionals and former senior executive branch officials.

Contrary to some pundits and media coverage, this bill would not amount to Pelosi herself invoking the Twenty‐​fifth Amendment or removing Trump from office, nor is the possible use of the Twenty‐​fifth Amendment an unconstitutional “coup.” Any such move to invoke Section 4 would still require the assent of the vice president, the president’s hand‐​picked running mate and designated successor. Even if Section 4 were invoked, sustaining it over a president’s objection requires two‐​thirds majorities in both the House and Senate, a higher hurdle than impeachment and conviction. Pelosi’s concern might be political messaging, but for the immediate circumstances it’s not much more than that.

Raskin has long championed the idea out of apparently genuine concerns about continuity of government. But that doesn’t make it a good idea. The inclusion of medical professionals might sound reasonable, but invocation of the Twenty‐​fifth Amendment is not really a medical decision. It is a legal decision based on constitutional and policy concerns, and a variety of practical reasons weigh in favor of leaving the power where it is, with currently serving senior executive branch officials.

Consultation with the president’s doctors would certainly be part of the decision. In most cases, it wouldn’t be a close call. If the president is comatose or the equivalent, the need to transfer power is obvious enough. Borderline cases might involve severe senility or a mental health crisis. But the medical ethics involved here are tricky at best, particularly for doctors who might not have directly examined the president. It’s even more dubious given that four of the eight medical professionals to be chosen would be psychiatrists. Removing an elected officeholder from power is not properly the role of physicians or psychiatrists. Even more troublesome is Raskin’s provision for Congress to request a medical examination of the president, a procedure not contemplated by the Constitution.

The inclusion of retired officials is also problematic. Raskin’s bill would provide for congressional leaders of both parties to name an equal number from among former presidents and vice presidents, former heads of the departments of State, Defense, Justice, or Treasury, or former surgeons general. These, together with the doctors also chosen on an equal bipartisan basis, would number sixteen and then vote among themselves to select a seventeenth member as chairman.

Part of the point of Section 4 is to provide swift action in an immediate crisis, including at the most extreme a possible attack on the United States requiring a military response from the commander‐​in‐​chief. When the amendment was ratified at the height of the Cold War, nuclear command and control was a real concern, and it still is. There should be no ambiguity or delay in deciding who has their finger on the button.

Members of the Cabinet are well positioned to serve in this role. Since they are already serving as senior government officials, and in particular are in the presidential order of succession, they are in constant communication and most have protective security details. Their location is never unknown, they can be quickly reached, and they are already in the loop on major policy decisions. They are also appointed by the president, providing a greater degree of legitimacy and fewer chances for politically motivated action to remove a duly elected chief executive.

Former officials, on the other hand, are not in such constant contact. They will be scattered around the country, may be difficult to reach quickly if needed, may be of advanced age themselves, and do not regularly meet with the president to judge any changes in his condition. In the event of a sudden emergency, summoning Raskin’s proposed Commission to act could take crucial hours, defeating a major purpose of Section 4. The large number of Commission members involved—seventeen, up from the Cabinet’s current fifteen—adds to the procedural complexity when time might be of the essence.

Though the vice president would still provide an important check, the political optics of a president being removed by members of the opposition party would also be worth avoiding, particularly members of a previous administration of the opposite party. It doesn’t take much imagination to see how partisans would react to Eric Holder or Loretta Lynch voting to depose Donald Trump.

Raskin aims to take the decision out of the hands of officials he sees as too dependent on the president, including that they are potentially fireable by him. But requiring a Section 4 invocation to come from those close to and politically aligned with the president is a feature, not a bug. It adds needed legitimacy and reduces the possibility of partisan abuse.

Trump’s behavior and personality, especially in his current medical condition, have prompted real concerns about his fitness for office. A responsible and prudent president might have voluntarily invoked Section 3 upon being hospitalized and quarantined. But Trump has not reached the point that would justify involuntary transfer of power over his objection under Section 4, especially given the bipartisan supermajorities that would be required to sustain that decision. He may be erratic, and maybe even incompetent, but he is not literally unable to sign bills or issue orders. That Section 4 hasn’t been invoked to date is not a failure in need of remedying, as Cato’s Gene Healy explained in response to Twenty‐​fifth Amendment talk earlier in Trump’s presidency.

Well‐​intentioned though it may be, this plan is not the improvement Section 4 needs. It would undermine the continuity of government that Section 4 aims to preserve. That doesn’t mean changes aren’t worth considering, though. One possibility would be to remove lower‐​ranked Cabinet officials such as the secretaries of education and agriculture. The “big four” positions of State, Defense, Treasury, and Justice might be more nimble and are more likely to be involved in national security crises, since they already serve as members of the National Security Council. Those four together, possibly with others who work closely with the president such as the national security advisor or chief of staff, might be an improvement over the full fifteen‐​member Cabinet, ensuring the ability for prompt action in an emergency.