Napoleon’s Bicentenary: Why Celebrating The French Emperor Has Become So Controversial 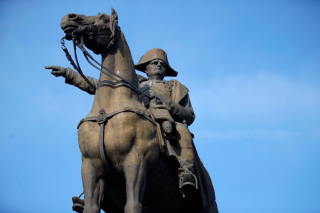 Napoleon Bonaparte may have died 200 years ago, but the vast ramifications of his rule can still be felt – and not only in France. This year marks the last in a series of bicentenaries since 1969, the 200th anniversary of his birth, but the chance to give the most famous emperor in French history another send-off is proving distinctly tricky – and not only because of COVID-19 restrictions.

This isn’t the first time that commemorating Napoleon or the events of his reign has posed a problem. In 2005, the then president of France, Jacques Chirac, and his prime minister, Dominique de Villepin – also a Napoleonic historian – thought it wise to sidestep the celebrationsfor the bicentenary of the French victory against the Austrians at Austerlitz. A key part of this decision, in commentators’ eyes, was mounting controversy about Napoleon’s legacy, including accusations of genocide against people in the colonies.

By the bicentenary of Waterloo in 2015, the commemoration of these battles had become distinctly less nationalistic in tone across Europe. Traditionally portrayed as an Anglo-French duel, exhibitions about Waterloo emphasised the role of soldiers from Prussia and the battle’s larger social and political context.

The year 2021, also marketed as the “Année Napoléon” or “Napoleon Year”, has been a difficult milestone. It used to be the president who decided the who, what and when of official commemorations. But, in the wake of a series of backlashes, the French president Emmanuel Macron decided that such commemorations needed to be “pacified”.

Since January 2021, the “France Mémoire” section of the Institut de France has overseen the selection of official figures to commemorate. This year its list includes Napoleon. “France Mémoire” emphasises the importance of debate, of democratising memory, and of accurate historical information.

But others are less optimistic about how much genuine debate there will be. In a recent interview, Thierry Lentz, a major Napoleonic historian and the director of the “Fondation Napoléon”, claimed there are two recurrent issues with commemorating Napoleon today: his reintroduction of slavery and his misogyny.

Napoleon’s role in the reintroduction of slavery isn’t a new point, but this media-heavy debate has gained traction, especially in the resurgence of the Black Lives Matter movement and the toppling of the statue of Napoleon’s wife in Martinique, a Caribbean island and a French overseas department.

France abolished slavery in 1794, but Napoleon’s role in its reintroduction is literally on view in one of the major blockbuster exhibitions to commemorate the bicentenary, L’Exposition: Napoléon, at La Villette in Paris. Here, displayed for the first time, visitors can see the originals of the orders of May 20 and July 16 1802 that re-established slavery in various French colonial territories.

This year, there might be less debate about Napoleon’s misogyny, but it has been prominent in the past. The Civil Code (also referred to as the “Napoleonic Code”) of 1804 essentially made married women subservient to their husbands, and the two spouses were subjected to different standards if they wanted to divorce.

There is also a plethora of quotes by Napoleon about the position of women in society that in today’s context tarnish his image. Outside of academia, the topic of Napoleon and women seems to have shifted from the ramifications of the Civil Code to the relationships he cherished with the women close to him. There’s also more of a focus on the fact that he gave some of these women important political tasks. While more sympathetic readings of Napoleon’s legacy may diffuse some tension, the potential remains for charges of misogyny to erupt once more.

But what about the larger picture? Author and thinker Germaine de Staël, an outspoken opponent of Napoleon’s who lived in Napoleonic France, is often cited as an example of a independent woman of the time. Lower down the social ladder, there are multiple examples of women who succeeded in having a public life despite the repressive laws. Female actors and theatre directors, for example, could lead financially independent lives. Caroline Branchu, a singer of mixed French and Haitian heritage, was one of the most famous performers of the legendary Paris Opéra and was reportedly courted by Napoleon.

However, at the same time, people of colour were excluded from contemporary life, as author and historian Tom Reiss has charted through the swashbuckling life of General Thomas Alexandre Dumas. Father of one of France’s most famous authors, Alexandre Dumas, Thomas Alexandre Dumas rose to prominence as a general during the Revolution, only to see racial inequalities introduced under Napoleon.

These examples aren’t attempts to deny Napoleon’s legacy, far from it, but analysing cases such as these offers us examples of resistance and change. They also reintegrate other difficult aspects from Napoleon’s reign that we would do well to remember today, such as the enormous death toll of the period’s military campaigns and the way in which these conflicts stirred nationalistic sentiments across Europe.

Recent discussions about Napoleon show that his legacy is a far from settled. It’s interesting that many of the official channels promote the importance of debate and discussion when talking about Napoleon. The La Villette exhibition on Napoleon even has a manifesto to this effect. But a cursory glance at social media and newspaper columns show that the debate about Napoleon’s legacy is very much still ongoing.

Realistically, these contests over Napoleon’s memory are not likely to be settled any time soon, if ever. However, the commemorations and the debates that accompany them will shape Napoleon’s image for future generations. We can’t alter the facts of Napoleon’s reign, but who we give a platform to, what we choose to focus on and how we debate can lead to a more comprehensive understanding of a period’s complexity – and perhaps a little of our own complexity too.

Clare Siviter is a Lecturer in French Theatre and Performance, University of Bristol