A Nationwide $15 Minimum Wage Is a Bad Idea 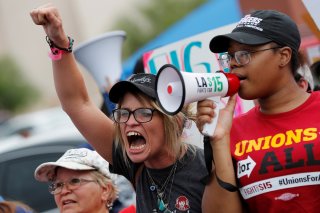 What is populism? One way to define it is by referring to various policy views frequently associated with it, such as opposition to immigration and free trade. A deeper and more philosophical approach might define populism as a politics that rejects policy constraints and trade-offs. In the 1991 paper “The Macroeconomics of Populism,” economists Rudiger Dornbusch and Sebastian Edwards identify several key commonalities in Latin American countries governed by populists, including the existence of a savior-type leader who ignores the existence of any type of constraints on economic policy. Makes sense. Populism typically surges in nations where there is dissatisfaction with economic performance. So why should the people or the new populist government listen to elites fretting about, say, the impact of unchecked spending on their currency when this same group failed to deliver prosperity when they were in power?

By this deeper definition, both Democrats and Republicans have been having a populist moment. Take the issue of a national $15 minimum wage, a policy supported by Democratic presidential nominee Joe Biden — also, it seems, just about every progressive on social media. The policy seems so uncontroversial to many on the left that merely raising the possibility of possible downsides to the policy generates much eye-rolling at best and a pretty vicious response at worst.

But such confidence is unwarranted. At a recent AEI book event, the issue of the minimum wage was discussed in a way that might surprise people who know only what Democratic politicians and pundits or “Fight for 15” activists have to say about minimum wage. The focus of the event was a new book by Brookings scholars Richard Reeves and Isabel Sawhill, A New Contract with the Middle Class. And one of their proposals is a $12 federal minimum wage floor, not $15.

I asked Reeves to explain why their proposal calls for a lower minimum than what many on the left seem to want. Reeves: “Clearly, there’ll be some who say, on the left, that it doesn’t go anywhere near far enough, in many cases, but the minimum wage is a good example where, actually, we look at the labor market and think $12 is okay as a national floor, but you’ve got to be careful. And we do say some cities and places might want to go higher, but $15 is, in our view, too high.”

Such caution about a $15 minimum wage is hardly surprising once you realize that few states or cities have tried such a high minimum. It’s ridiculous to hand-wave away any possible negative employment effects. Indeed, the nonpartisan Congressional Budget Office has estimated that a $15 minimum wage would eliminate 1.3 million jobs. And more data from Strain’s recent Bloomberg column:

According to data from the Bureau of Labor Statistics, half of all workers in 20 states earned less than $18 per hour in 2019. In 35 states, the median hourly wage was less than $20. Setting a minimum wage so close to the median wage would price many workers out of the labor market. Indeed, in 47 states, 25% of all workers earned less than $15 an hour. … A team of economists, including the University of Washington’s Jacob Vigdor, have been studying the employment effects of Seattle’s move to increase its minimum wage to $15. In 2016, Seattle — a high-wage city — had hit a $13 minimum, on its way to $15. The economists found that this led to a 9% reduction in low-wage jobs. The pay increase it generated didn’t make up for the reduction in employment, and earnings fell for low-wage workers overall. The economists’ subsequent research found that the gains from the higher minimum wage accrued to more experienced workers.

This is the sort of reasoned, data-driven analysis that lots more political debates could use — even on social media.