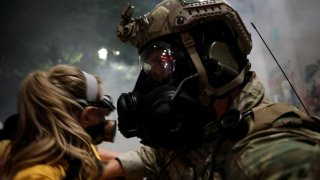 The federal Department of Homeland Security has sent Border Patrol agents to act as police in Portland, Oregon in recent days. By what authority? And have its agents behaved there in a way consistent with the law, the Constitution, and good police practice? I took a first look at those questions in a Monday piece at The Bulwark. Since then the situation has changed, and not for the better. [see update below — W.O.]

When I wrote, DHS was being careful to ground its actions in one of the narrowest and most widely accepted of the federal government’s law enforcement powers, that of defending its own installations from attack. (The Portland federal courthouse has come under recurring nightly siege for weeks, which has included arson attempts and physical assaults on officers.) This week, however, President Trump suggested that he would also send federal law enforcers into “Chicago, Detroit, Philadelphia” and other cities.

This is plainly a pivot into something else. Have you seen reports that courthouses or other federal property are under siege in most of these cities? I haven’t. In some of them, it has been weeks since the last widespread public unrest related to the George Floyd protests. Some of the cities are indeed known for alarming rates of homicide and gang violence, but those do not constitute an imminent threat to federal buildings, let alone some sort of Whiskey Rebellion‐​style insurrection against the feds’ political authority. As has been widely discussed in recent weeks, Trump could assertthe authority to deploy actual military units to riot zones were he to invoke something called the Insurrection Act of 1807, but such an invocation would be deeply controversial, and almost ludicrous in the case of cities where there is plainly no insurrection going on.

If Trump follows through, and the administration begins to insert itself more broadly into local policing, expect it to seek out untested and unfamiliar legal authorities as justification. (For an example of how this worked in last month’s Washington, D.C. protests, involving a stretchy and loophole‐​ish excuse for putting state national guard units under federal direction, check out this Lawfare piece by Steve Vladeck).

In the mean time, the hands‐​on problems of the Portland deployment are coming into sharper focus. DHS is taking the defiant position that its agents will not wear badges with their own names, period — it says they’ll instead wear numerical “identifiers,” so at least it will have a hope of knowing which ones misbehaved. Its camouflage‐​wearing agents are clothed with enough ambiguity — bearing hard‐​to‐​spot agency patches, for example, together with generic “POLICE” rectangles — to threaten confusion over whether they are indeed genuine Federales or just rowdy freelancers making believe.

As for the arrests of persons bundled into vans, DHS has already essentially conceded that one was a case of mistaken identity, while another, analyzed here by Harvard Law criminal procedure specialist Andrew Crespo, appears to have lacked the probable cause required under constitutional standards. It’s hard to picture a defense of the federal agents’ conduct in the latter case that does not come back to the excuse that they were put on the street with training too skimpy for them to grasp the constitutional standards that apply to arrest.

That’s not a defense we should find satisfactory — especially if this federal policing campaign is to roll out to more cities.

UPDATE: Wednesday afternoon, after the above appeared, President Trump held a press conference announcing that he was assigning “surge” federal law enforcement to Chicago and Albuquerque, modeled after a pilot effort in Kansas City. From the initial coverage, my quick reading is that despite the talk of Portland Everywhere, this may be a pivot to a much less provocative (if still objectionable) kind of federal role. In particular, the U.S. Attorney in Kansas City said the federal participants “won’t be patrolling the streets,” “won’t replace or usurp the authority of local officers,” and, should they participate in arrests, to quote AP, “will be clearly identifiable when making arrests, unlike what has been seen in Portland.” Moreover, they appear in each case to have negotiated cooperation agreements with the cities involved — the feds are sweetening that with money. I see much talk of using the federal presence against gang shooters, rather than against demonstrating mobs, statue‐​topplers, etc.

In other words, it looks at a glance not like a roll‐​out of the Portland adventure but like a separate “crime wave surge assistance” program that would be new in almost no way — the feds already cooperate with cities on a lot of this — and would mostly involve FBI, DEA, and other conventional federal law enforcers rather than repurposed Border Patrol agents and the like. There is talk of deferring to local priorities, and no talk of getting anywhere near street policing or crowd control, while the numbers of feds involved are too small to suggest a big role in that anyway. In short, sound and flash but not actually a major assertion of new federal policing power as had been feared.

It is worth remembering, however, that just as this administration has sometimes followed highly aggressive announcements with relatively innocuous policy rollouts, so it has also sometimes done the reverse. And note that (in common with earlier administrations) this one continues to neglect to distinguish the constitutional distinction between its role in fighting federal crimes from a wider and more constitutionally irregular ambition of fighting local violence prosecuted under state law. “Indeed,” as Chief Justice Rehnquist wrote for the U.S. Supreme Court in U.S. v. Morrison (2000), “we can think of no better example of the police power, which the Founders denied the National Government and reposed in the States, than the suppression of violent crime and vindication of its victims.”

This article by Walter Olson first appeared in CATO on July 22, 2020.