NATO Fears That Poland's Suwalki Gap Could Be Its Achilles' Heel 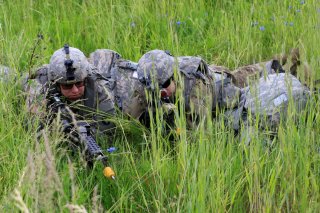 Here's What You Need To Remember: Not only could Russian ground forces advance from Kaliningrad and possibly Belarus to interdict the gap, but they could use long-range artillery and Iskander ballistic missiles to hammer NATO bases and reinforcement columns, potentially inflicting heavy casualties and imposing critical delays.

Since 2014, NATO strategists have focused much of their attention on a forty-mile-wide stretch of border between Poland and Lithuania called the Suwalki Gap (pronounced ‘Soo-vow-kee’). The gap’s two highways are the only land corridor by which NATO troops could reinforce its Baltic member states in event of a conflict with Russia.

The Suwalki Gap earlier figured in World War I and the Napoleonic Wars. Today, it remains relevant due to political geography, as you can see in this map.

To the west of the Gap is the Russian exclave of Kaliningrad, which hosts over 15,000 Russian troops and bristles with heavy artillery and long-range ballistic and anti-aircraft missiles.

To the east of the gap is the authoritarian state of Belarus, which is nominally allied with Russia despite increasing tensions between its long-term dictator Alexander Lukashenko and Moscow. Russian forces are already deployed in Belarus and have been accorded passage from there to Kaliningrad. However, Belarus’s cooperation with Russia in a conflict with NATO is not guaranteed.

Thus the “gap” is a natural chokepoint Russia could potentially assail from multiple directions to pinch off columns of NATO troops attempting to reinforce the Baltics.

The Soviet Union seized the Baltic states of Estonia, Latvia and Lithuania early in World War II, deposing their governments and deporting over 130,000 “politically unreliable” citizens including the presidents of Estonia and Latvia, both of whom died in Siberian prison camps.

The Baltics won back their independence in September 1991, and today fall under the mutual defensive umbrella of NATO. However, the alliance continues to adhere to the non-binding NATO-Russia Founding act of 1997 in which NATO promised to forego permanently deploying sizeable international forces in Eastern Europe.

Since 2008, however, Russia has increased pressure on the Baltics. Moscow has alleged anti-Russian discrimination of ethnically Russian minorities in all three countries, rhetoric it employed to justify military invasions of territory in Eastern Ukraine and Georgia.

Moscow’s agents have launched massive cyber-attacks on Baltic governments, fomented riots in Baltic countries, kidnapped an Estonian intelligence operative on Estonian soil, and have been expelled for spying on military positions. Russia’s Western Military District has repeatedly performed large-scale exercises simulating an invasion of the Baltics and strikes on neighboring Poland—exercises which could be used to mask the presence of an actual attack.

A Russian invasion of the Baltics remains unlikely—but Moscow’s actions seem intended to convey one could happen.

The Baltic states collectively have a population of only 6.6 million and could not stop a Russian invasion by themselves. None operate tanks or jet fighters; instead, their light infantry armies are stocking up on Javelin anti-tank missiles in the hopes they could delay invaders for a few days.

A Russian invasion would depend on rapidly seizing the Baltics in less than a hundred hours, presenting a fait-accompli before NATO can effectively respond. In 2016, wargames by the RAND think tank found that Russian forces could seize the capitals of Estonia and Latvia in between thirty-six to sixty hours—though the study may have been based on debatable assumptions.

Meanwhile, Russia’s cyber propaganda and disinformation campaigns would seek to turn international opinion against NATO “starting” a war against Russia’s “humanitarian intervention.” Moscow would essentially be gambling that Western European countries would be unwilling to risk nuclear war to liberate already-conquered Baltic states.

In 2016, NATO began temporarily rotating four multinational mechanized battalions of 4,500 personnel to the Baltics and Poland.

Here’s a rundown of the larger units of the ‘Enhanced Forward Presence’ as of April 2019:

At Adazi, Latvia, a Canadian mechanized battalion is supported by a company each of Polish PT-91 tanks and Italian, Slovakian and Spanish mechanized infantry.

At Orszyz, near the Suwalki gap, Washington has committed a battalion-sized squadron of the Tennessee National Guard’s 278th Armored Cavalry Regiment, equipped with M1 Abrams tanks and M3 Bradley scout vehicles. The 278th is partnered with Poland’s 15th Mechanized Brigade (Soviet-style T-72M1 tanks and BWP-1 fighting vehicles), as well as a British light reconnaissance company, and a battery each of Croatian Vulkan self-propelled rocket artillery and Romanian air-defense missiles.

(Note: A company typically counts one hundred to two hundred personnel, and ten to twenty armored vehicles. A battalion is composed off at least three frontline companies plus additional support units.)

A few reinforced battalions, no matter how capable, cannot hope to stop an invasion that could involve dozens of battalion tactical groups. Russia’s Western Military District, for example, has over 300,000 personnel, and the RAND wargame assumed Russia would deploy 450 tanks.

Instead, the battalions function as “tripwires” by putting NATO skin in the game. If Russia wants to invade the Baltics, it theoretically would have to fight and kill NATO soldiers deployed there, not merely overrun small Baltic militaries. Doing so would make a vigorous NATO counter-attack more likely.

Given the small number of troops, however, Russian forces could attempt to bypass the “tripwires” and focus on securing the surrounding countryside.

Conventional Deterrence in the Baltics

The trip-wire concept only works if NATO can promptly counterattack with its 40,000-strong response force. That means traversing the Suwalki gap, as Baltic airspace and maritime lines of communication would be heavily interdicted by Russian missiles.

Not only could Russian ground forces advance from Kaliningrad and possibly Belarus to interdict the gap, but they could use long-range artillery and Iskander ballistic missiles to hammer NATO bases and reinforcement columns, potentially inflicting heavy casualties and imposing critical delays. Using long-range weapons would allow Moscow to deny its forces are invading another country, while raising the political risks of Western counterstrikes. Russia used cross-border artillery strikes to deadly effect in Eastern Ukraine in 2014.

Of course, Russia would only attempt an intervention in the Baltics if it perceived a lack of credible capability and resolve in NATO. Thus, a 2018 report by the Center for European Policy Analysis argues that the best method to defend the Baltics is to make NATO’s deterrent presence more credible.

The report’s author, Lt. Gen. Ben Hodges, argues that more static defense-in-depth strategy is ill-suited to a conflict where NATO forces may start out distant from the action.

Such relatively cost-efficient reforms could ensure that NATO forces can move quickly and powerfully enough that a Russian “stab-n-grab” operation like the seizure of Crimea that relies on speed, deception and political chaos is less likely to pay off. The optimistic implication is that improving defenses of the Suwalki gap and the Baltic could make an unlikely but potentially devastating Russia-NATO war even less likely to happen at all.

Sébastien Roblin holds a master’s degree in conflict resolution from Georgetown University and served as a university instructor for the Peace Corps in China. He has also worked in education, editing, and refugee resettlement in France and the United States. He currently writes on security and military history for War Is Boring. This article was first published last year.