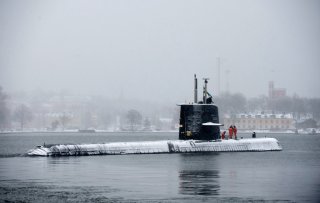 Here's What You Need To Remember: Sweden’s two A26s should be completed between 2022 and 2024, at which point it will be possible to gauge whether they can meet their ambitious performance parameters. In general, advancements to AIP submarines are allowing countries across the globe to acquire capable short and medium-range submarines at an affordable price.

For decades, submarines came in two discrete flavors: traditional diesel-electric submarines always had issues with range while nuclear-powered submarines that could quietly hum along under the sea at relatively high speeds for months at a time thanks to their nuclear reactors.

Sébastien Roblin holds a Master’s Degree in Conflict Resolution from Georgetown University and served as a university instructor for the Peace Corps in China. He has also worked in education, editing, and refugee resettlement in France and the United States. He currently writes on security and military history for War Is Boring. This first appeared in 2018 and is being reprinted due to reader interest.