Naval Assault Ships Could Get More Powerful With Missiles 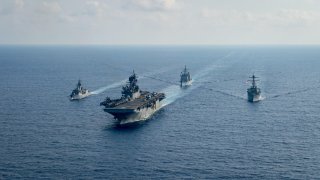 Here's What You Need to Remember: These warships allow the Marines to land and do their thing. But what if they could also pack a big punch?

David Axe served as a defense editor for the National Interest. He is the author of the graphic novels  War Fix, War Is Boring and Machete Squad. ​

This article was first published in 2019, and is being republished due to reader interest.