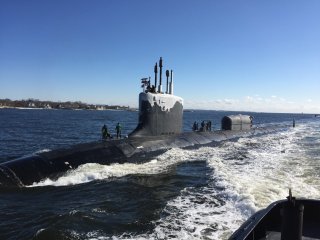 Here's What You Need To Remember: Poseidons might offer a significant nuance to the Pentagon’s well-cultivated nuclear deterrence posture, by introducing a technically advanced method of finding and destroying enemy SSBNs from the air. It aligns with the current “offensive power can be the best defense” approach central to the Pentagon’s nuclear-triad strategic deterrence strategy.

Seeking to overcome the Pacific’s “tyranny of distance” dispersed geography, and track China’s expanding fleet of submarines, the Navy is working with Congress to produce as many as three Virginia-class submarines per year, moving beyond the current plan to build two. In the air, the Navy has been moving to place its new Triton sea drones in Guam and has recently awarded Boeing a $2.4 billion deal to produce 19 more P-8A Poseidon surveillance and attack planes.

Currently in service with UK, Norwegian and Australian militaries, among others, the Poseidon is increasingly in demand in the international market.

Osborn previously served at the Pentagon as a Highly Qualified Expert with the Office of the Assistant Secretary of the Army - Acquisition, Logistics& Technology. Osborn has also worked as an anchor and on-air military specialist at national TV networks. He also has a Masters Degree in Comparative Literature from Columbia University. This article first appeared last year.