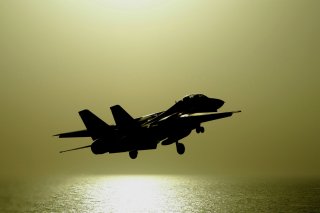 Here's What You Need to Remember: Shortly before the invasion of Iraq kicked off, a special detachment composed of five F-14As, five two-person crews and 30 maintainers from Navy Fighter Squadron 154 left the aircraft carrier USS Kitty Hawk and set up shop ashore at Al Udeid air base in Qatar, where U.S. Special Operations Forces were also located.

The attack was a success. The killing blow came when the F-14s guided Air Force F-15Es as they dropped 5,000-pound bunker-buster bombs to wipe out the underground bunker. Today, VF-154 flies F/A-18F Super Hornets.

David Axe was the Defense Editor of the National Interest. He is the author of the graphic novels War Fix, War Is Boring, and Machete Squad.

This first appeared in WarIsBoring here in 2018 and is being reposted due to reader interest.