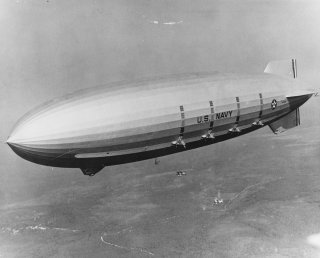 Here's What You Need To Remember: Regardless of speculation, World War II was won without flying aircraft carriers, proving they weren’t a war-winning asset. The concept has lain dormant for decades, but recent Pentagon research into turning the C-130 Hercules transport into a flying aircraft carrier for pilotless drones means the concept is still alive and well.

Nearly a hundred years ago the U.S. Navy asked a question: if airplanes can fly through the air, why couldn’t a vessel carrying them fly through the air as well? The result was the Akron-class airships, the only flying aircraft carriers put into service in any country. Although promising, a pair of accidents—prompted by the airship’s limitations—destroyed the flying carrier fleet and ended the development of the entire concept.

The flying carrier concept had its advantages and disadvantages compared to the “traditional” seagoing carrier. Akron and Macon were twice as fast as surface ships, and could therefore cover more ground. By their very nature, those onboard could see much farther over the horizon than surface ships, and their Sparrowhawks extended that range even farther. For just sixty men manning each airship, the Navy had a powerful reconnaissance capability to assist the battle fleet in fighting a decisive naval battle.

On April 3, 1933, USS Akron was on a mission to calibrate its radio equipment off the coast of New Jersey when it ran into trouble. Strong winds caused the Akron to plunge 1,000 feet in a matter of seconds, and the crew made the snap decision to dump the water ballast to regain altitude. The airship ended up rising too quickly and the crew lost control. Akron crashed into the sea, killing seventy-three out of seventy-six personnel on board, including the head of the Navy’s Bureau of Aeronautics and the commander of Naval Air Station Lakehurst, and the station’s Rigid Airship Training & Experimental Squadron.

On February 12, 1935, USS Macon was over the Pacific Ocean when a storm caused the upper fin to fail. Macon had suffered damage to the fin months earlier, but the Navy had failed to repair the damage. The collapse of the upper fin took approximately 20 percent of the ship’s helium with it, causing the airship to rapidly rise. The crew decided to release additional helium to make it sink again, but too much helium was lost and the ship descended into the ocean. Macon’s slower crash than her sister ship Akron, as well as the presence of life jackets and life preservers aboard the airship, ensured that eighty-one out of eighty-three passengers and crew survived the accident.

Kyle Mizokami is a defense and national-security writer based in San Francisco who has appeared in the Diplomat, Foreign Policy, War is Boring and the Daily Beast. In 2009 he cofounded the defense and security blog Japan Security Watch. You can follow him on Twitter: @KyleMizokami. This article first appeared two years ago.