The Navy's Plan to Build Flying Submarines for Navy SEALs 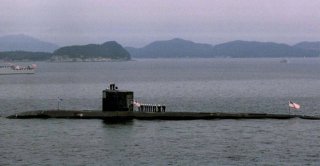 In Variant 1, the personnel compartment for special operators was placed forward of the cockpit, as these compartments would flood during submerged operation, placing the pressurized cabin as close to the vehicle’s center of gravity as possible.

In this configuration, the vehicle’s batteries are stored on either side of the personnel compartment, in line with the turbofan engines.

Operators would deploy through a large hatch on top of the vehicle near the equipment locker. Both turbofan engines would be placed far to the rear and as close to the centerline of the vehicle as the cabin would permit, though the study points out that analysis should be done regarding performance during a single-engine failure. If the engines were mounted too far apart and one were to fail, it could place the flying submarine in an unrecoverable flat spin — a problem that cost the Navy as many as 40 F-14 Tomcats.

This arrangement resulted in an exterior appearance that was more triangular in shape than the alternative, explaining its slightly longer dimensions.

Variant 2, on the other hand, sought an even lower profile along the vehicle’s centerline, accomplished by distributing equipment and personnel across a wider area. As discussed in earlier sections, the personnel compartment carrying special operators would be split in two, placing three operators on each side of the pressurized cabin in reclined chairs to maximize headroom while minimizing height.

This design places the turbofan engines, ballast tanks, air pressure system, and some other components in the same places as Variant 1.

The batteries in Variant 2 are placed ahead of the pressurized cabin and between the personnel compartments. Operators would again exit through hatches on top of the vehicle, but would have to swim to its rear to grab their bags, scooters, and other mission-specific equipment.

The result is a shorter, wider exterior design with a slightly lower centerline. This arrangement proved heavier, due to its added width and associated fairing.

How to take a flying submarine to war

According to DARPA’s Concept of Operations and the conclusions drawn by the Navy’s study, the following is an approximation of a flying submarine could be leveraged in covert operations.

The vehicle would be deployed by any surface vessel large enough to carry it and equipped to place it in the water. Two vehicle operators (pilots) would enter the pressurized crew compartment and begin their pre-flight checks as the Navy SEALs or other special operations divers donned their equipment and stored the rest in the vehicle’s gear locker.

Once the flying submarine was in the water atop two specialized inflatable floats that eliminated the suction effect a hull can have on the surface, its two turbofan engines would propel the vehicle to 100 knots, at which point, the unusual aircraft and all on board would take to the sky.

Once airborne, a lightweight fly-by-wire control system fed through a flight control computer would manage the aircraft’s twin-flap control surfaces that allowed roll-independent yaw control, thus eliminating the need for a vertical tail. The vehicle would remain airborne until it was approximately 12 nautical miles from shore, which is the conventional limit of territorial waters. In other words, even if someone were to spot the aircraft flying along its route, it would be seen flying over international waters.

Using the same inflatable floats, the flying submarine would land on the surface of the water. If necessary, the vehicle could then traverse further on the surface of the ocean, turning through modulating the output of the turbofan engines independently. It would then deflate its floats and fill its ballast tanks, submerging the vehicle and flooding all compartments except the pressurized cabin.

The SEALs inside, donning wetsuits and completely submerged in water, would draw breath from the same high-pressure air system that keeps the cabin pressurized and refills the vehicle’s floats. Based on industry capabilities in 2010, the study posits that storing enough air to meet all operational requirements internally would be entirely feasible, so there would be no need for any means of refilling the air tanks.

The vehicle would then deploy its underwater propulsion pod, using an electric motor to propel it forward and a combination of the motor’s orientation and the vehicle’s flight control surfaces for maneuvering.

“It is envisaged that the pilot will be assisted by a flight control system acting between the manual yoke inputs and the final flap deflections and that this system should be able to deal with the smaller deflections needed for underwater maneuvering.”

The flying submarine, now more submarine than airplane, would approach the shore fully submerged, opening its hatches and deploying the combat divers while deep enough to avoid detection. Once out of the vehicle, the divers would grab their gear from the equipment locker and travel on using submersible scooters or by swimming to shore.

The special operators would then have 72 hours to conduct clandestine operations in enemy territory while the vehicle’s two pilots remained onboard and fully submerged. Once the special operations team completed their mission, they would return to the water, swimming back to the vessel and reentering it while submerged, reconnecting to its onboard air supply. At which point, the pilots would drive the vehicle back into international waters before surfacing, inflating the floats, and taking off once again to fly back to the ship that deployed it or to a different designated recovery point.

What happened to the Navy’s flying submarine concept?

After testing a scale model, the Navy’s report concluded that “feasible vehicle concepts can be generated using current technology and materials” to design and build a real special operations flying submarine, but as far as the public is aware, that’s the end of the story.

To be perfectly clear, it’s difficult to say if this study resulted in further development of a flying submarine or if it was quietly shelved alongside other exotic but seemingly feasible programs.

It’s important to remember that the United States was not particularly concerned with Great Power Competition or the possibility of near-peer conflict in 2010. In fact, this study came two years after a different effort to deploy low-observable drones from the vertical launch tubes of Ohio-class ballistic missile submarines was canceled for budgetary reasons and one year before the F-22 Raptor program was canceled after just 186 out of 750 intended fighters were delivered.

To be frank, America’s defense apparatus was funding combat operations in multiple theaters against opponents with no notable air or sea power… so efforts to field stealthy or otherwise highly advanced platforms in either environment were simply not the priority.

It’s possible, however, that development continued on the flying submarine concept at a low volume and scale, and to be honest, the United States may even have some such platforms in service today. After all, the F-117 Nighthawk first took to the skies in 1981, but wasn’t revealed to the public until 1988. Today, America has successfully flown a technology demonstrator for its Next Generation Air Dominance program, assembled three B-21 Raiders, and regularly operates the highly secretive RQ-170, all without most of us getting a good look at any of them. It stands to reason that there are other programs we remain entirely in the dark about.

The Navy may have concluded that it was feasible to build a flying submarine, but that doesn’t mean the Navy felt it was practical. The truth is, if there is such a vehicle in service today, we likely won’t know for years to come… but if there isn’t, the Navy’s engineers had an interesting bit of advice for future endeavors.

According to them, the secret is approaching the problem with the intention of building a submersible aircraft, rather than a flying submarine. Apparently, planes do better underwater than submarines do above it.