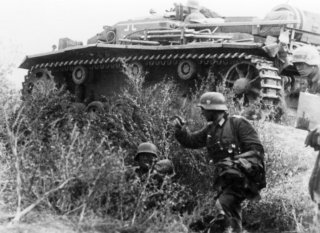 Here's What You Need To Remember: This is where Mark’s narrative begins to break down. It’s not his fault — it’s simply harder to keep track of what happened given the chaos. The shock of the Soviet attack was so severe, Panzer-Abteiling 129 broke down as a cohesive fighting unit. The battalion’s surviving tanks, disorganized and disrupted, merged with other German formation as they fell farther back into the pocket.

The Panzer-Abteilung 129, a tank battalion serving with the German 6th Army, fought its way into the Soviet city of Stalingrad in late 1942 only to find itself pinned down during winter. A a million-man Red Army counter offensive, attacking in two giant pincers, surrounded the Germans that November.

Trapped, the battalion’s soldiers sheltered wherever they could in a village to find warmth — and whatever meager protection the homes provided from regular Soviet air attacks.

The last days of the battalion were brutal and unimaginably miserable, as recounted in the first volume of historian Jason Mark’s highly-regarded series Panzerkrieg: German Armored Operations at Stalingrad — which traces the day-by-day history of 6th Army tank battalions using extensive primary sources from those who witnessed the battle.

“Gradually, the losses become sensitive,” German war correspondent Parzival Kemmerich wrote in December 1942. “Every night, and sometimes even by day, there are dead and wounded in the village. Added to this is the lack of panzer crews. Last but not least, the psychological stress resulting from the inactivity imposed on us becomes apparent.”

“Waiting, coupled with idleness, is probably the worst thing for the German soldier. He then begins to brood, and the sun shines darker.”

Shortly after Kemmerich wrote that account, the battalion prepared to head west to resist Soviet forces which had flanked the 6th Army from behind. But some of the biggest problems for the ordinary German soldier was sheer exhaustion combined with malnutrition — and the weather. The horrible, frigid weather.

Despite the Russian winter being the second one experienced by the German army in the war, Panzer-Abteilung 129 lacked winter clothing. That was due in part to Soviet forces overrunning several supply depots.

“Usually, only the commander of a combat vehicle has cold protection suit and a pair of felt boots, which are absolutely necessary, as he drives with the cupola open and stands in the midst of an icy draft which, furthermore, is also swept past him by the cooling of the engine,” Kemmerich reported.

“Without special clothing, he would soon be frozen.”

On New Year’s Eve, the German soldiers played cards, drank cognac, dodged aerial bombs and ate dogs. Two days later, the battalion began moving westward across the winter terrain — what one soldier described as an “endless white surface of death” that reminded him of stories of polar explorers he read as a child.

The Panzer-Abteilung 129 eventually — facing to the northwest — dug itself in near the village of Dmitriyevka, which the Soviets needed to take before reaching Karpovka to the south, which housed a railway station and a vital airfield the Germans needed to bring in supplies. To the battalion’s northeast were the German 29th, 44th and 76th Infantry Divisions; to the southwest, the 3rd Infantry Division.

“It was an orderly battle formation with enough strength to put up stout resistance — on paper,” Mark writes. “In reality, however, many favors were stacked against the Germans.”

His descriptions of the landscape, collected from first-hand accounts, are apocalyptic. There were plenty of corpses lying around — horse and human — which contributed to further demoralization within the German ranks already beaten down by hunger and cold.

Worse, the Panzer-Abteilung 129 was short on everything, particularly ammunition. What was left had to bear the brunt of the final Soviet offensive toward Stalingrad, named Operation Koltso. In the Panzer-Abteiling 129‘s sector, the battalion faced the Soviet 21st Army as it approached from the northwest.

When the offensive finally arrived on Jan. 10, 1943, the Soviets opened up with 8,000 artillery pieces — the largest bombardment of the war at that point — and attacked with three armies along the front.

This is where Mark’s narrative begins to break down. It’s not his fault — it’s simply harder to keep track of what happened given the chaos. The shock of the Soviet attack was so severe, Panzer-Abteiling 129 broke down as a cohesive fighting unit. The battalion’s surviving tanks, disorganized and disrupted, merged with other German formation as they fell farther back into the pocket.

On Jan. 14, three or four surviving German tanks sped through a village toward a nearby rise named “Hill 2.0,” which had been occupied by Soviet tanks. The charge so shocked a “horde” of starving, German rear-area troops hiding in the village that they ran outside and followed the tanks into battle — believing this to be their chance to escape the pocket.

The attack shocked the Soviets, too, who retreated from the hill. But that was as far as the panzers were either willing or able go, and so the tank crews set up a defensive position. “Disappointed, [the accompanying German soldiers] simply drifted back to their hidey-holes,” Mark writes.

The Soviets returned the next day and smashed the German position. At that point, Mark notes, Panzer-Abteiling 129 had effectively ceased to exist as survivors fled into the city of Stalingrad proper. None of the battalion’s officers would return to Germany alive.