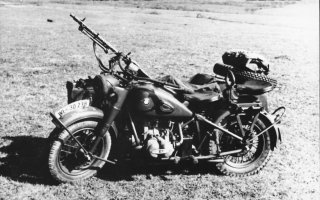 Here's What You Need to Know: It's one of the more successful motorcycle designs ever built.

During the Second World War, Nazi Germany fielded a large variety of troop transport vehicles. Several of the successful builds were conventional four-wheel jeep-like cars like the Kübelwagon, which enjoyed commercial success after the war in a modified design that was offered on the civilian auto market by Volkswagen. The similar Schwimmwagen was an aquatic “bathtub on wheels.” Both vehicles were prized for their off-road capability and were considered robust and reliable. But, the German industry also built a reliable motorcycle that was even greater success.

Both BMW and Zündapp designed a motorcycle in the late 30s after a solicitation by the German Army. Their designs, were quite similar, sharing about 70% of parts. However, they were not exactly the same. Both designs featured a relatively powerful 750cc two-cylinder engine that had a decent 26 horsepower output.

Both motorcycles were praised for their substantial off-road performance. They could tackle steep and rugged terrain, ford bodies of water such as streams, and even had a sidecar. While sidecars normally reduce the capability of motorcycles by adding substantial additional weight, both designs could function in two-wheel drive mode and were not overly burdened by their sidecars.

Two wheel drive was possible thanks to a drive shaft connecting the motorcycle’s powered rear wheel with the sidecar’s wheel. The additional powered wheel helped compensate for the relatively heavy base weight, which increased when all three seats (driver, sidecar passenger, and back passenger) were used by fully equipped soldiers. The sidecar also had a pindle-style mount for a general-purpose machine gun, augmenting the motorcycle’s firepower.

Both designs served the German Wehrmacht in North Africa and Europe, a testament to their high reliability and usefulness.

The successful design spawned a several near-duplicates. The Soviet Union produced the Dnepr M-72, a reverse-engineered copy of the BMW design that was acquired from Germany via the Molotov-Ribbentrop non-aggression pact between the Soviet Union and Nazi Germany. It replaced several older and more dated Soviet designs. The design was exported to China, where it was built as the Chang Jiang, a very close copy of the Soviet design.

The United States was also impressed by the German design, which was lauded for being highly reliable and very low maintenance, despite the austere and demanding wartime conditions it was put through. The U.S. Army approached Harley-Davidson, and the firm created the Harley-Davidson XA. Though the design met Army criteria, few machines were made, as the Jeep became the favored general purpose vehicle.

Today, the Russian-built Ural series of motorcycles are still produced in Russia and while updated with more modern materials and components, are based on the original late 1930’s German design—making the design not far from 100 years old, and perhaps one of the more successful motorcycle designs ever built.