Need a Concealed Carry Gun? Here Are the 5 Best. 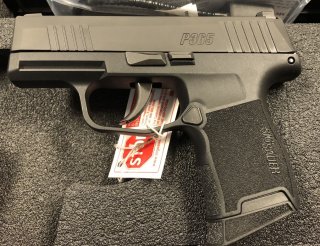 Here's What You Need to Remember: Smith & Wesson’s subcompact semi-automatic pistol is possibly the smallest and lightest nine-millimeter handgun on the market. The M&P9 Shield is a smaller version of the company’s success M&P series of handguns, retaining the same general layout and method of operation. This allows the user of a full-sized or compact M&P pistol to quickly transition to the subcompact model with a minimum of additional training.

A concealed carry weapon is typically used by those whose who believe themselves to be at greater threat than normal, usually for prolonged periods of time. A concealed carrier, for example, might be a police officer, private detective, or an individual that carries a large amount of cash or expensive equipment with him or her for one reason or another. A lightweight, compact handgun that can be forgotten yet quickly brought into action in emergencies is a priority. With that in mind, here are the top 5 concealed carry handguns.

One of the most popular concealed carry handguns is the Glock 26. The G.26 is a descendant of the original Glock 17, a striker-fired polymer and steel handgun developed by inventor Gaston Glock for the Austrian Army. The full-sized Glock 17’s success spurred a variety of offshoots in .45 ACP and .40 Smith & Wesson, then the compact Glock 19, and the subcompact Glock 26 in 1994.

The Glock 26 is functionally identical to the rest of the Glock family line, particularly the Glock 17. Internally and externally it is the same pistol, with two exceptions: barrel length is 3.43 inches instead of the G.17’s 4.49 inches, leading to a shorter pistol with an overall length of just 6.5 inches. The grip is also shorter, resulting in a shorter, ten-round magazine. The double stack magazine configuration ensures ammunition capacity is in the double digits but also makes for a wider pistol.

In the 1950s, Colt worked to create a shorter version of the full-sized M1911A1 Government handgun. The Government was a large and powerful pistol, but it was also fairly heavy for full-time carry. In response Colt created the Commander, a smaller, lighter pistol still chambered in the powerful .45 ACP round.

The Colt Commander is functionally identical to a M1911A1 Government, and many of the parts are identical. Feature-wise, the Commander retains the seven-round magazine, grip safety, manual safety, and external hammer. The Commander’s main differences are a smaller frame, slide, and barrel. The barrel is 4.25 inches, resulting in a slight reduction of overall length.

In the late 2000s, Sturm Ruger introduced a new line of compact revolvers for concealed carry use. First introduced in 2009, the LCR series complemented Ruger’s full-sized GP and compact SP series of revolvers with a subcompact that was extremely lightweight and carryable.

The Ruger LCR is a small frame revolver that achieves significant weight savings through the use of a polymer and aluminum frame. This is complemented by a stainless steel cylinder. The result is the use of weight-saving materials where possible and no-compromise stainless steel where necessary. Another feature attractive to concealed carriers is the lack of an external hammer.

The LCR weighs just 13.5 ounces unloaded, or about the same as a large set of keys. It has a 1.87 inch barrel and an overall length of 6.5 inches. Notably for small frame revolvers, it can use higher pressure +P ammunition.

The Sig P365 is Sig Sauer’s entry into the subcompact market. The P365 is a striker fired pistol, eliminating the need for an external hammer that could catch on clothing while being drawn. The 365 is also a double action pistol, meaning a single pull of the trigger cocks the pistol and releases the firing pin on a round in the chamber. As long as a round is in the chamber, trigger pull is a reasonable 5 pounds.

The P365 is a double stack pistol, meaning even with a reduced grip length the magazine still holds ten rounds of nine millimeter ammunition. The P365 is even rated for more powerful, +P ammunition. Sig Sauer’s subcompact is considerably smaller than other subcompact pistols, just 5.8 inches long by one inch wide, and at 17.8 ounces unloaded is lighter than other semi-automatic pistols in its size class.

Smith & Wesson’s subcompact semi-automatic pistol is possibly the smallest and lightest nine-millimeter handgun on the market. The M&P9 Shield is a smaller version of the company’s success M&P series of handguns, retaining the same general layout and method of operation. This allows the user of a full-sized or compact M&P pistol to quickly transition to the subcompact model with a minimum of additional training.

The M&P9 Shield features a steel slide and polymer frame with embedded steel chassis. The striker-fired pistol has an overall length of 6.1 inches, just under average for its size class, but also weighs just 20.6 ounces. A single stack configuration limits the user to just seven rounds per magazine but also narrows the pistol down to a width of less than one inch. As a result, the M&P9 Shield is one of the narrowest pistols available.