Need to Resupply Nuclear Submarines in a Pinch? Try Drones. 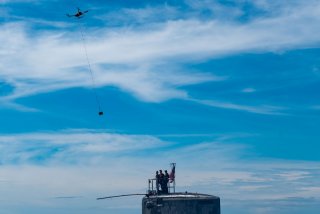 Here's What You Need to Remember: The evaluation demonstrated the potential ways in which submarines, and really any other surface ship can be resupplied without even having to go into port. This is particularly true of small-volume supplies like medical or emergency supplies.

Alternative resupply methods are not just a topic of interest for the U.S. Navy either. The Navy’s sister service, the Marine Corps is also exploring alternative resupply techniques. One proposed method takes a page from narcotrafficers and the semi-submersibles they sometimes use to move illicit drugs across the ocean to the United States or Europe. By building a number of cheap, automatically piloted semi-submersibles, the Marine Corps could in theory also keep groups of Marines on far-flung Pacific islands fed, watered, and resupplied.