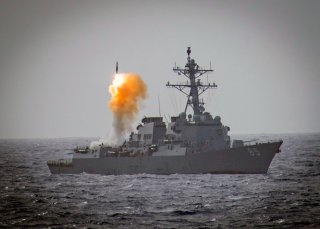 Here's What You Need to Remember: War with China is the most dangerous scenario facing us and the world. Absent a strategic method to manage our differences, Jim Stavridis and Elliot Ackerman’s chilling novel presents a realistic series of miscalculations leading to the worst consequences.

If the United States is going to fight another world war, it will likely bear not much of a resemblance to the first two. That’s the premise of a new novel—and also an op-ed piece by its authors.

Retired Admiral James Stavridis and novelist Elliot Ackerman have teamed up to write “2034: A Novel of the Next World War,” which is available now from Penguin Group USA. The book’s Amazon page describes it as “a chillingly authentic geopolitical thriller that imagines a naval clash between the U.S. and China in the South China Sea in 2034—and the path from there to a nightmarish global conflagration.”

The authors of the novel have also published an op-ed in The Washington Post, titled “The Next World War Won’t Be Anything Like the Last. Here’s How the U.S. Must Prepare.”

“If you believe that future wars will be conducted like those in the past, in which the sophistication and numbers of our ships, planes and tanks are the essential metric of dominance, then the United States remains in an enviable position,” Stavridis and Ackerman write. “But the world is evolving quickly and dangerously. And in war, what is past is rarely prologue.”

They go on to state that while the U.S. maintains dominance when it comes to aircraft carriers, such warfare “is becoming antiquated and challenged by undersea threats.” The future is more likely to be dominated by drones and autonomous and unmanned military technology.

There’s also cyber warfare, as evidenced by the recent SolarWinds hack, which is also likely to play a role in warfare in the future. After the op-ed was published on Wednesday, an intelligence report appeared stating that Russia once again attempted to interference in the 2020 presidential election.

So how can the United States prepare for that sort of war?

“Our personnel needs will change in multiple ways: We will need to select, train and employ people with a Special Forces-like mentality—finding far smaller numbers of elite men and women who can integrate with the advanced technology using biotechnological breakthroughs,” the authors state. “And we must recognize that the major weapons systems of the future will largely be unmanned and often autonomous. We continue to buy and build weapons system designed for conflicts we are not likely to face again.”

2034: A Novel of the Next World War” has gained praise from none other than retired general and former Secretary of Defense James Mattis, who blurbed the book.

“War with China is the most dangerous scenario facing us and the world. Absent a strategic method to manage our differences, Jim Stavridis and Elliot Ackerman’s chilling novel presents a realistic series of miscalculations leading to the worst consequences. A sobering, cautionary tale for our time,” Mattis said, per the book’s Amazon page.

Stephen Silver is a journalist, essayist, and film critic, who is also a contributor to The Philadelphia Inquirer, Philly Voice, Philadelphia Weekly, the Jewish Telegraphic Agency, Living Life Fearless, Backstage magazine, Broad Street Review, and Splice Today. The co-founder of the Philadelphia Film Critics Circle, Stephen lives in suburban Philadelphia with his wife and two sons. Follow him on Twitter at @StephenSilver.

This article appeared earlier in 2021. It is being reprinted due to reader interest.