The New Deal and Recovery: The Roosevelt Recession of 1937 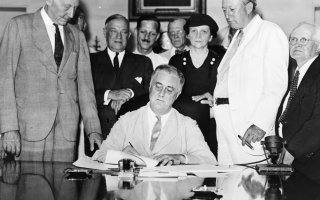 But Friedman and Schwartz' critics may not have the last word. Instead, their arguments have been questioned in turn by Gauti Eggertsson and Benjamin Pugsley (2006), who claim that the Fed's doubling of reserve requirements contributed to the 1937 downturn even though it didn't lead to any substantial decline in bank lending or the money stock, or to any substantial or lasting increase in short-term interest rates. In their view, the Fed's decision mattered not because it led to an immediate tightening of credit but because it was the first important sign that the government was reversing its stance on inflation: having long promised to get prices back to their pre-depression levels, and despite not having yet reached that goal, government officials now seemed determined to put a lid on inflation.

Eggertsson and Pugsley consider this official about-face "one of the most peculiar policy mistakes in U.S. economic history." But they regard it so not because it led to any immediate clamping-down on credit, but because it "created pessimistic expectations of future growth and price inflation that fed into both an expected and an actual deflation." Nominal rigidities, finally, caused the collapse in prices to be accompanied by an equally severe contraction of output.

Using a dynamic stochastic general equilibrium (DSGE) model, Eggertsson and Pugsley show that, far from depending on any increase in current short-term interest rates (as opposed to expectations of future rate increases), such an expectations-driven downturn can be "particularly damaging at zero interest rates." Because it's immune to the objection that monetary policy can only matter if it leads to immediate changes in bank lending, money growth, and short-term rates, the Eggertsson and Pugsley thesis gives "monetary" explanations of the 1937 downturn a new lease on life.

The Fed's doubling of reserve requirements was but one of two monetary policy changes that may have contributed to the Roosevelt Recession, whether through an expectations channel or otherwise. The other, which some consider more important, and which was also part of the government's effort to forestall inflation, was the Treasury's decision to "sterilize" gold inflows.

In fact, Friedman and Schwartz themselves viewed the Treasury's gold sterilization program as being just as important a cause of the contraction of '37 as the Fed's reserve requirement increases. The Treasury had nevertheless been cast in most accounts since as the Fed's less important accomplice. But in a 2012 paper Dartmouth economic historian Doug Irwin makes a strong case for giving the Treasury pride of place.

As we've seen, after 1933 gold fleeing Europe for the U.S. was the chief cause of overall demand growth and, starting in 1935, of concerns that the U.S. was headed toward unwanted inflation. The Fed could do nothing to prevent the gold inflow from adding to banks' reserves; but it could and it did force banks to hold on to those extra reserves. The Treasury, on the other hand, could sever the link between increases in the total U.S. gold stock and increases in the monetary gold stock, where the last alone contributed to bank reserves. Normally, after drawing on its Fed balance to pay to buy gold at the official price of $35 an ounce, the Fed would replenish its account by depositing an equivalent sum in gold certificates. The monetary gold stock and monetary base would then grow in step with the total gold stock. To sever the link, and thereby "sterilize" the gold inflows, the Treasury had merely to quit printing and depositing a like value of gold certificates for every ounce of gold it purchased.

And from December 1936 until February 1938, excepting a one-time "desterilization" of $300 million in September 1937, the Treasury did just that, with the express aim of "halt[ing] the inflationary potentialities" of incoming gold. As the next FRED chart shows, because the Fed itself extended very little credit during the sterilization period, the Treasury's policy slammed the brakes on the monetary base growth that had been promoting recovery, to the extent that other New Deal policies allowed it to, since 1934. The chart also makes clear the close coincidence, allowing for a short lag, between the start and finish of the Treasury's policy and the beginning and end of the 1937-8 recession as reflected in Ayres' Business Activity index.

According to Irwin, the Treasury's sterilization policy was far more contractionary than the Fed's reserve-requirement increases, partly owing to the fact that reserve requirements were less binding than Friedman and Schwartz and others have supposed, but also because the change in the growth rate of the monetary base, from an average annualized rate of 17 percent between 1934 and 1936 to zero, was far greater than the concurrent change in the money multiplier. For this and other reasons, including its timing, Irwin concludes that the Treasury's policy played the more important role in the 1937-8 recession.

But it was, after all, the combined effects of the Fed and Treasury actions, rather than the relative importance of each, that really matters. And here it's worth noting that each player acted rather as if it didn't know, or didn't care, what the other was up to! While both Marriner Eccles and Treasury Secretary Henry Morgenthau saw a need to clamp down on money growth to head-off inflation, Eccles favored doing so by raising the Fed's reserve requirements, while Morgenthau tried to convince him that sterilizing gold inflows was the better policy. Instead of coming to an agreement, or otherwise coordinating their policies, Eccles went ahead with the Fed's first reserve requirement increase without bothering to tell Morgenthau, let alone gain his approval. When that increase seemed to make little difference, Morgenthau proceeded with his sterilization program, after securing Eccles' last minute and grudging endorsement. Then, despite Morgenthau's expressed reservations, Eccles in turn went ahead with Fed's further reserve requirement increases. It is as though two doctors, sharing the same overanxious patient, each insisted on administering a strong sedative, whether the other did so or not, and ended up rendering her unconscious.

But here again, my analogy falls short, because it's far from obvious that the U.S. economy needed a sedative at all. It fails in another respect as well. For instead of just getting a double-dose of sedatives, the U.S. economy got several. Just what those other sedatives were, and how they contributed to the economic collapse, will be the subjects of my next installment.