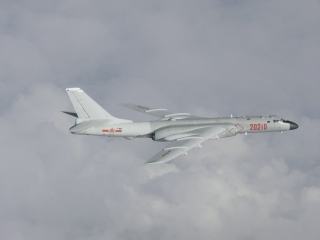 Here's What You Need to Remember: There are no pictures from the parade preparations that show the H-6Ns carrying a payload and some of them appear to have a plug installed that gives the fuselage its normal profile when a missile is not loaded. So, it remains unclear what type of weapon, or weapons, the Chinese intend to employ on these aircraft.

The new munition, possibly a variant of the DF-21D ballistic anti-ship missile, could pose a serious danger to U.S. Navy vessels operating in the western Pacific. Aircraft carriers, in particular, could be at risk.

The new H-6N variant of the venerable Chinese bomber -- itself a clone of the Soviet Tu-16 -- first appeared over Beijing during preparations for celebrations marking the 70th anniversary of the founding of the People’s Republic of China. Military parades and fly-overs are scheduled for Oct. 1, 2019.

But Trevithick thinks it’s the DF-21D. “Previous reports have indicated that an air-launched derivative of the DF-21D anti-ship ballistic missile, reportedly called the CH-AS-X-13, will be the primary weapon for the H-6N.”

Besides arming its bombers with a possible new missile, Beijing has been making efforts to diversify and harden its anti-ship arsenal.

The deployment reportedly was a response to the appearance of a U.S. Navy warship near the Paracel Islands on Jan. 7, 2019. The destroyer USS McCampbell sailed near the island group as part of a "freedom-of-navigation operation," or FONOP.

The U.S. Navy conducts FONOPs in order to assert its legal right to sail through international waters regardless of which country claims nearby territory. China's state-run Global Times new outlet described McCampbell's appearance near the Paracels as "trespass."

The DF-26, not to mention the DF-21D, could be vulnerable to the latest American defenses. The U.S. Navy's SM-6 interceptor missile theoretically is capable of hitting a DF-26 in two phases of its flight -- shortly after launch, as the Chinese missile is climbing and gaining speed, and then again in the DF-26's terminal phase, as it arcs down toward its target.

Even if the Americans can't shoot down the DF-26 or DF-21, it's unclear that the rockets reliably could hit a moving ship at sea from 2,000 miles or even just 1,000 miles away. "The accuracy of the DF-26 is uncertain," CSIS explained, "with speculators estimating the [circular error probability] at intermediate range between 150 to 450 meters," or around 500 to 1,500 feet.