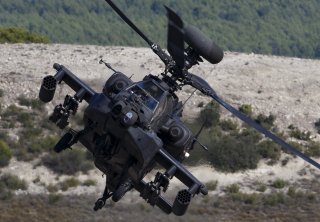 Here's What You Need to Remember: A U.S. Army AH-64E Apache helicopter destroyed a target 23 miles away using a new Spike-NLOS missile earlier in 2021.

On March 17, 2021, an AH-64E Apache Guardian helicopter lifted off from Eglin Air Force Base on the coast of the Florida panhandle. While cruising over the Gulf Mexico it launched a missile from a boxy two-shot launcher mounted under its stub wings—a weapon distinctly different from the usual quad-rack loaded with Hellfire anti-tank missiles.

As the weapon leaped out of the launcher its solid-fuel rocket motor engaged and X-shaped wings and tail fins scissored out from the missile’s fuselage. As the missile streaked over the water at up to 425 miles per hour a flexibly mounted camera in the weapon’s nose transmitted video footage to the helicopter crew.

A few minutes later the 156-pound Spike-NLOS missile plunged into a small boat floating on the Gulf—an impressive twenty miles away, three or four times the maximum range of its usual Hellfire armament.

There are several ways the Spike-NLOS missile may have executed the precise twenty-mile shot. The Apache’s gunner peering through the video feed might have manually piloted the missile in a drone-like fashion to smash into the boat. Or the Spike might have been launched in ‘fire or forget’ mode, cruising towards designated GPS coordinates until its built-in infrared seeker detected and locked onto the boat’s heat signature.

In fact, quite likely a combination of both methods was used—with the gunner remaining a “man in the loop” capable of manually overriding the missile’s lock to abort or redirect the attack if necessary should, say, civilians enter the target area. The link between helicopter and missile is initially maintained by a five-mile-long fiber-optic cable before switching to an encrypted radio link.

Earlier in January 2020, the Army announced it had chosen the Spike-NLOS (for “Non-Line of Sight”) as an interim weapon for its Apaches—a relatively easy fit as Israel already deploys the missile on its own AH-64s. The Pentagon had previously wasted $1 billion and a decade failing to develop a NetFires missile with similar capabilities before canceling the program in 2011.

The Army will initially procure 205 Spike-NLOS missiles in 2021 in a $43 million contract, implying an effective unit price of $209,000 per missile. These will be built by a Lockheed Martin production line in Troy, Alabama, in partnership with Rafael. Separately, the Marine Corps and U.S. Special Operations Command are testing both short-range (SR) and NLOS Spike missiles. Spike missiles incidentally come in anti-tank variants with tandem-shaped charges to defeat reactive armor, as well as blast and concrete-piercing models for anti-personnel roles.

Israel originally devised the Spike missiles in the 1970s to help counter the large tank inventories of Syria and Egypt. But after the initial variant entered service in 1981, Israeli tacticians saw it could be adapted into a far-reaching precision strike weapon for picking off enemy weapons teams—resulting in the Tammuz or Spike-NLOS model.

Though the Tammuz remained veiled in secrecy for many years, the Spike ultimately spawned five generations and numerous sub-variants and was widely exported across Asia and Europe and incorporated into diverse land, air, and sea-based vehicles.

The Spike-NLOS, in particular, saw extensive combat use with the Israeli Defense Force in 2006 and 2014, the British Army in Iraq and Afghanistan (dubbed the Exactor, and initially cloaked in secrecy for political reasons), and by the Azerbaijani army against Armenian forces in the Nagorno-Karabakh war. Most recently in the 2021 Israel-Hamas war, the Israeli Navy used Spike missiles launched from gunboats for precision strikes against Hamas’s naval commando assets.

Attack helicopters are highly lethal platforms, but unlike high-flying jet fighters, even the most agile and well-armored helicopter is vulnerable to numerous weapons ranging from heavy machine guns and rapid-firing autocannons, to portable and vehicle-mounted short-range surface-to-air missiles.

The Spike-NLOS, therefore, gives the Apache a tool with which it can engage air defense vehicles, or key targets protected by them, from well beyond their effective range. For example, the Spike’s twenty-mile range outreaches the ten-mile range of a Russian Tor-M2 or Chinese HQ-17 air defense systems.

Against threats like later models of the Pantsir-S that might match or exceed the Spike’s range, there’s another card to play: the Spike’s manual control capability allows a helicopter crew to launch attacks from well behind concealing terrain (ie. without having a direct line of fire), shielding them from detection and attack. Spike’s video feed feature also means it can help the helicopter’s gunner scout out enemy positions at the same time as it’s delivering kinetic strikes.

An indirect attack is admittedly possible to a degree with the Longbow radar mounted atop the rotors of Apaches, which can “peak” above hills or trees to provide guidance for missiles without exposing an Apache’s hull.

But an August 2019 test demonstrated the Spike-NLOS allows for a far more thorough concealment: a low-flying Apache launched a Spike from behind a steep 1,600-foot-high mountain in Yuma, Arizona, to strike a simulated Russian Pantsir-S target on the reverse slope. You can see the remarkable shot here. The test also simulated jamming in the final seconds of the attack to test whether the missile would stay locked onto a target if its manual control link was disrupted (it did.)

That said, tactics leveraging the Spike-NLOS’s range and indirect fire capability can only really work if enabled by a highly networked battlefield environment in which an Apache crew receives targeting coordinates and sensor feeds from other spotters such as drones or friendly forces on the ground. Conveniently, the AH-64E model comes with significant drone-control capabilities, and the Spike-NLOS also has a baked-in datalink to receive targeting data from other platforms.

The Spike will remain a specialized capability, and won’t come close to replacing the Apache’s mainstay weapon, the cheaper  AGM-114 Hellfire—which comes in laser-guided R model and radar-L model—nor its excessively costly successor, the AGM-179 JAGM missile combining both types of seekers. These fly more than twice as fast at Mach 1.3 out to their 5-7 mile maximum range.

The Once and Future Apache

The 2021 Spike-missile test ties in two other major developments: the U.S. Army’s quest to get better at sinking ships, and its Multi-Domain Battle doctrine. These both stem from the current strategic zeitgeist emphasizing military competition with China over the Pacific Ocean.

Meanwhile, the Army’s Multi-Domain Battle doctrine is focused on networking sensor and shooter platforms more comprehensively across services—exactly the sort of connectivity the Apache needs to take advantage of a missile that shoots further than its crew and radar can see.

In the long term, the Army is seeking a Long-Range Precision Fire missile for its forthcoming FARA scout/light-attack helicopter; a shoot-off between candidates is planned late in 2022. According to Garrett Reim of Flight Global, the Spike-NLOS test has established the performance baseline other companies will need to match or exceed to win the competition.

Regardless of how the LRPF competition goes, the Army’s move to integrate a mature and capable off-the-shelf weapon onto its Apaches seems like an all-around win for keeping the Army’s Apache helicopter fleet tactically and financially viable in the coming decades.