The New Upgrades on the Abrams Tanks Are Incredible 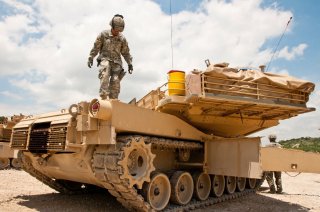 Here's What You Need to Know: One of the signature elements of the v3 pertains to longer-range, higher-resolution thermal sights for finding otherwise unreachable targets.

The long-awaited next-generation Abrams tank variant is now operational with Army units. The arrival of the M1A2 SEP v3 Abrams is a substantial step forward into a new era of modern warfare defined by advanced threats, a more dispersed battlefield, and a growing number of multi-domain challenges.

One of the signature elements of the v3 pertains to longer-range, higher-resolution thermal sights for finding otherwise unreachable targets. This is a crucial area of innovation for the Army, as many are likely to remember stories from famous Gulf War tank battles. Abrams tanks were able destroy Iraqi T-72s at standoff ranges. This greatly contributed to U.S. victories.

The arrival of the new v3 signifies a milestone when it comes to Abrams modernization. Many senior Army weapons developers maintain the tank has been upgraded so many times that it will remain viable for years into the future. Army weapons experts have made many adjustments over the years to address, mitigate, and overcome what could have been seen as limiting factors in prior years. Advanced navigational technology such as mapping, sensing and multi-node networking have improved the tank’s ability to maneuver and find optimal points of entry in seemingly inaccessible close-quarter urban areas. Should a bridge or narrow area present restrictions for an Abrams, advanced networking, for location data and mapping might quickly calculate new alternative transport routes.