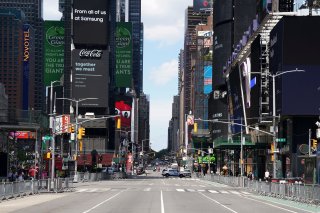 The New York Post told Altucher to “drop dead,” noting that, if he really loved the city as he claims (he co‐​owns a comedy club there), he would stay and do his part to revive it. Guardian columnist Arwa Mahdawi suggests that New York is not only not dying, “the rich are moving out and the city is being reborn.”

With all due respect to these people, I think they missed the point of Altucher’s argument. New York as a city is going to survive. But New York as an idea, a place that builds wealth and fulfills dreams like nowhere else in America, will not. Not to put too many words in Altucher’s mouth, what is really dead is the idea that New York City or Manhattan densities are necessary to have a healthy economy and diverse culture.

Altucher pointed out that the pandemic has taught high‐​income people that they don’t need to deal with the congestion, high costs of living, homeless people, crime, and other stresses of the densest city in America. The things that made New York attractive are disappearing: lots of restaurants are permanently closed; lots of entertainment businesses promise to reopen next year, but no one knows if they will.

Mahdawi and others may be smugly happy to see rich people leave, which she hopes will make the city more affordable. But those rich people provide the start‐​up capital and the initial demand for all of the businesses that made New York City exciting.

The key to any thriving economy is exports, and what New York City exported was money. If the owners of that money decide they don’t have to be in New York City to export it, then the city loses the biggest driver of its economy.

The big danger is that the city will still be unaffordable after the wealthy people have left. Sure, rents will decline, but not enough to make it truly affordable. In 2017, median home prices in Manhattan were more than a million dollars, which was 9.4 times median family incomes. To be “affordable” (i.e., less than three times incomes) home prices would have to drop by more than two‐​thirds — much more if the exodus of high‐​income people pushes down median family incomes.

New York City’s construction costs have been the highest in the world. The people who paid those costs to build housing aren’t going to accept 25 percent or less of what they were expecting for the condos and apartments they have built. Instead, they’ll figure out other uses for that space and it won’t be available as housing.

A few weeks ago, I participated in a Cato Institute debate with market urbanist Scott Beyer over housing and land‐​use regulation, and Beyer’s main argument was that density has a value to businesses and personal interactions. It is quite likely that the COVID-19 virus has reduced that value to less than its cost.

Richard Florida got famous telling cities that what he called the “creative class,” the people who build wealth, were attracted to density. He still thinks they will return after the pandemic is over. But there is a very real chance that they won’t, and the longer the pandemic lasts the greater that chance will be.

After all, they will realize, even if someone finds a cure or vaccine for the virus, there will be something after that and something else after that. If they can conduct their businesses living and working in lower densities — and judging from the current state of the stock market, they can — then many will not feel the need to return.

The next time you fly into Newark, La Guardia, or JFK, there will still be skyscrapers across the Hudson or East river. If you want to watch a baseball game, the Yankees and the Mets will still be playing. But will New York still be the world’s wealthiest city, with more millionaires than any other city in the world? Quite possibly not. And the exodus of the wealthy is just a symptom of the city’s real problem, which is that the people who once made it great no longer believe it is necessary.