New Zealand Thought It Had Coronavirus Under Control. Now It's Locking Down Again. 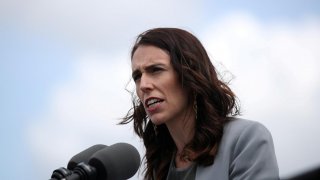 A coronavirus outbreak of 29 cases as of Friday connected to one New Zealand family in South Auckland is all it took for Prime Minister Jacinda Ardern to order a new lockdown of New Zealand’s most populous city, as well as substantially limit daily activities nationwide. The number of cases has risen to 58 as of Monday.

The lockdown will be reevaluated after 14 days.

At the same press conference, Ardern suggested the COVID-19 level 3 restrictions now in force in Auckland won’t be as bad as the last time around, as certain food services that were shut down last time will be available this time. She also said that 44 construction sites will continue to operate.

On the other hand, Ardern did admit:

I’m mindful of the extraordinary disruption to business and the anxiety that this outbreak will be causing. As before, we will use what tools we have to protect jobs, incomes, and businesses—as well as people’s health.

Those tools include blowing through billions of dollars to subsidize the wages of workers nationwide with sectors such as hospitality and tourism on the life support of government aid, and the number of people in New Zealand getting COVID-19 income relief payments or Jobseeker support payments continuing to rise.

In its initial response to COVID-19, New Zealand had imposed one of the most stringent lockdowns of any country in the world. In fact, despite the cheerful assessment of many government officials in New Zealand about how the economy snapped back from the restrictions in place from March to May 2020, the facts tell a more nuanced story.

The total number of New Zealanders receiving income support from the government has been rising ever since efforts to isolate and contain the coronavirus began.

The number of those receiving income support in the form of COVID-19 income relief payments or job-seeker support stood at around 145,000 on March 20 (out of a total workforce of about 2.6 million), and has withstood a steady climb up to 215,000, rising again by 1,600 on Aug. 7 in the midst of what had then been 100 days without a known case of the coronavirus transmitted in New Zealand.

The previous lockdown—from late March to the end of April—mostly took place in COVID-19 “alert level 4,” in which the government did not allow most activities outside of people’s homes to occur. The current two-week lockdown of Auckland has started at COVID-19 alert level 3, which is significantly less restrictive and permits schools to open and weddings and funerals with limited attendance.

The rest of the country, outside Auckland, has moved to level 2 now because of the handful of new cases, up from level 1. At level 2, people are asked to work from home if they can.

The Heritage Foundation previously looked at New Zealand’s and 10 other countries’ responses to COVID-19, and found that while New Zealand stopped COVID-19 in its tracks, it may have damaged its own economy unnecessarily in the spring by forcing too many businesses to stop operating.

Other countries like Australia and South Korea also achieved good early outcomes against COVID-19, but with much less damage to their economies.

In New Zealand, not only has the number of people on the government doll been growing, but before the few dozen COVID-19 cases arose last week, business confidence had already deteriorated substantially in early August. An economy on the steroids of government handouts does not inspire confidence from business owners.

A New Zealand bank, Westpac Banking Corp., estimates that the new lockdown in Auckland and the rest of New Zealand will cost the country 0.5% of its gross domestic product, on top of the losses already incurred.

The New Zealand situation deserves close scrutiny. Having chosen one of the most draconian shutdown and isolationist strategies, the country has achieved initially good health results but at high economic cost. The Auckland outbreak would seem to indicate that bad health outcomes may not have been avoided entirely, but merely postponed, and the economic costs are growing.

Only time will tell whether the prime minister and her Cabinet have overreacted to the latest outbreak. Their strategy is clearly counting heavily on the early development of a successful vaccine, and they are doing everything they can to insulate the islands of New Zealand from negative health consequences in the meantime.

One thing that is sure, however, is that the longer and more severe the lockdown, the greater the chance that New Zealand—one of just six economically “free” countries in the 2020 Index of Economic Freedom—will transform into a place where proud and independent New Zealand job creators and entrepreneurs—having been told they must close down their businesses—become locked with much of the population into dependence on the government.

Over the long run, that would surely have negative economic, social, and health consequences, too. The goal, of course, is to minimize the overall impact of this crisis on people’s lives and well-being.

The New Zealand government has chosen a strategy more extreme than many others, and one can only hope that it works ultimately for the people of New Zealand.

This article by Patrick Tyrrell and Terry Miller first appeared in The Daily Signal on August 17, 2020.