With No Arms Embargo, What Weapons Will Iran Buy? 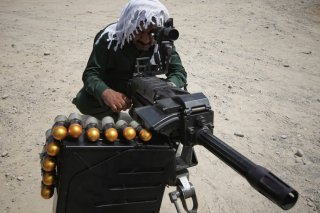 Here's What You Need to Remember: Finally, what a stronger Iran—one that does begin to arm up—could mean is that more Arab states will normalize relations with Israel. What that means for regional stability is unclear but battle lines that put nations in alliances often result in just larger wars—lessons Europe learned time and time again.

Last month, Tehran hailed the lifting of the United Nations arms embargo, and Mohammad Javad Zarif, Iran's foreign minister, said the expiration of the embargo was a “momentous day” for the international community. Whether that statement is true remains debatable, but it could certainly be a momentous time for any nation looking to sell arms to the Islamic Republic.

The Trump administration had tried to extend the embargo, but faced defeat at the UN Security Council in August as Moscow and Beijing voted against an extension while eleven other powers, including the UK, France and Germany all abstained.

On social media, Zarif said that normalization of Iran’s defense cooperation with the world “would bring peace” and security in the Middle East. Iran’s neighbors certainly see it another way.

As Defense News reported, Iran will likely soon begin acquiring armed drones, air defense systems, fighter jets, tanks and almost anything else it can. Tehran has shown interest in a variety of Russian military hardware but was prevented from purchasing any of it due to the multinational nuclear deal.

Experts have suggested that Iran knows that it is “outgunned” in terms of the latest military hardware. While its neighbors including Saudi Arabia and the United Arab Emirates maintain a qualitative gap, Iran must also contend with the air and naval forces of the United States, which isn’t likely to depart the region anytime soon.

However, there are still issues to consider. Iran’s economy still remains largely crippled by the United States’ broad-reaching sanctions, so Tehran’s coffers aren’t exactly overflowing with the coin to go on a military hardware spending spree. Moreover, it is highly unlikely that many nations—especially any U.S. partners—would be eager to close deals for fear of American financial retaliation.

As Politico reported last month, the Trump administration warned that any sale of weapons or exports from Iran would be penalized and it is unlikely the incoming Biden administration’s policies would be significantly different. Even as Russia and China voted against the embargo, it isn’t clear how much they’ll actually be willing to sell to Iran.

Iran may seek increased defensive capabilities, and already Tehran's air defenses provide the nation with a degree of deterrence. The air defenses have  increased the difficulty, expense and time required to launch air attacks against the Islamic State. This has posed a threat to non-stealth fighters, and Iran has also shown that it could shoot down an adversary’s drone—as it did when it took out a U.S. RQ-4N in June 2019.

Iran's Air Force, which has been largely starved of spare parts for its Cold War-era American-built fighters, presents little in the way of deterrence and instead it has doubled down with a diverse array of surface-to-air missiles (SAMs), which are operated by its Air Defense Force as well as Revolutionary Guard Corps.

However, Iran has expressed interest in rebuilding its Air Force and in the future it could operate the Russian Su-30 or MiG-35 fighters. Whether those would be a match for the Israeli F-35I Adir isn’t clear, but it puts in focus why the UAE has also sought to acquire the Lockheed Martin F-35 to counter a potential build-up of Iranian aircraft.

On the ground is where Iran could see a significant boost as Defense News also reported that in 2016, Russia announced it would provide Tehran to produce the T-90 main battle tank under license when the embargo was lifted.

While Moscow, which has faced its own embargos with the west, may be eager to sell arms to Tehran, and less clear is what Beijing may do. China must balance any relationship with Iran with that of its other regional trading partners including Saudi Arabia and the UAE.

Finally, what a stronger Iran—one that does begin to arm up—could mean is that more Arab states will normalize relations with Israel. What that means for regional stability is unclear but battle lines that put nations in alliances often result in just larger wars—lessons Europe learned time and time again.