No Matter Who Wins, Trump's Term Will End on January 20th 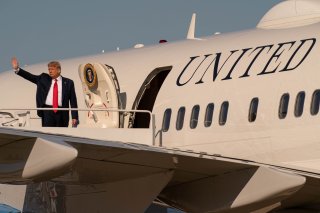 With so much unclear about the upcoming presidential election, it’s nice to know that there is one absolute certainty.

Mail-in ballots may take a long time to count. Many states will have recounts, either statewide or in specific areas. President Donald Trump has signaled he may not like the outcome – and it remains to be seen if he or others will accept the result.

As a historian who has taught and written about the Constitution for over 40 years, however, I know that one thing is certain. President Trump’s term will end at noon on Jan. 20, 2021. At that same instant, either he will begin a second term, or the country will have a new chief executive.

The framers of the Constitution did not establish a specific day that presidential terms end, but they were very clear that the president “shall hold his Office during the Term of four Years.” Not four years and a day. Not three years and 364 days. Four years.

How Long Should a President Serve?

However, they were emphatic that the president would serve for a defined period. Why? Because kings didn’t. They were creating a republic, where the people are sovereign, and neither they nor the American people wanted a monarch.

In September 1788, after the Constitution was ratified, the Confederation Congress directed that the new government would begin on March 4, 1789. That seemed to be enough time to conduct elections for representatives, senators, a president and a vice president – and for them to travel to New York, the seat of the new government.

It wasn’t. The House of Representatives achieved a quorum on April 1, the Senate on April 6 and George Washington took the oath of office as president on April 30.

Nevertheless, every four years thereafter, for more than 140 years, presidents began their term – whether a first or second one – on March 4 because Congress established it as Inauguration Day in 1792 and never changed it.

Electoral crises – the tie between Thomas Jefferson and Aaron Burr in 1800, the secession crisis in 1860-61 and the contested election between Rutherford B. Hayes and Samuel J. Tilden in 1876 – did not prevent one term from ending and another beginning on March 4.

Did a Transfer of Power Take Too Long?

The 20th Amendment, adopted in 1933, changed the day and time of presidential inaugurations to noon on Jan. 20.

The amendment was the result of a 16-year crusade by Sen. George W. Norris of Nebraska. Norris believed that lame-duck congresses that met between November and March following elections did not reflect the people’s will and should not legislate. This was especially true, he argued, if the party controlling that lame-duck session had lost in the November elections.

Equally a problem were defeated presidents who served for months after voters had declined to reelect them. In an emergency such as the secession crisis, the four-month interval between the election and inauguration of a new president had delayed a decisive response to disunion.

The Constitution set the term lengths for presidents, senators and representatives. Changing the date they started and ended would invite a constitutional challenge, so it could be accomplished only by amendment. Starting in 1934, Congress would convene, with newly elected members in the House and Senate, on Jan. 3 – and beginning in 1937, the president would take the oath of office at noon on Jan. 20.

What if There Were Other Problems?

The 20th Amendment also offered a path forward if things didn’t go smoothly in the runup to Inauguration Day.

If that happened, or if the person chosen wasn’t at least 35 years old and what the Constitution calls a “natural born citizen” of the country, the vice president-elect would serve until Congress picked someone else. If there wasn’t a vice president-elect or that person didn’t meet the Constitution’s criteria either, then Congress could determine who would serve as acting president until it decided how a new president would be chosen.

Fortunately for the nation, these provisions have never been tested. Some are straightforward – like allowing a vice president-elect to take the place of a deceased president-elect. But if a winner isn’t declared by Jan. 20, partisan division is likely part of the problem – and that means consensus after Jan. 20 may not be possible.

One thing is clear, however. The 20th Amendment creates a hard stop. The sitting president’s term ends at noon on Jan. 20. If Congress can’t determine a winner, the Presidential Succession Act, adopted in 1947, would make the speaker of the House of Representatives the new chief executive – at least for a time.

Whether he likes it or not, and whether he wins reelection or not, Trump’s current term as president will end Jan. 20. What happens next is yet unknown, but at least that much is certain.