No, We Don't Need More Bad "No Fly" List Proposals 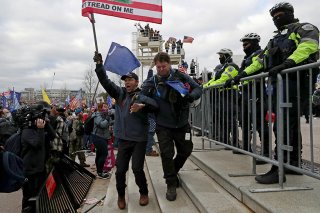 In Washington, the sequence leading to bad legislative and policy outcomes in the wake of a crisis is a familiar one. Phase 1 is The Event. Almost 20 years ago, it was the 9/11 attacks, which gave us, among other things, in Phase 2—The Overreaction—the abominable and ineffectual PATRIOT Act and eventually the Transportation Security Agency (TSA) and it’s now‐​infamous “No Fly” list, which has repeatedly snared completely innocent people—including the late Senator Ted Kennedy (D-MA) and Rep. John Lewis (D-GA).

The Event this time is the Capitol Hill insurrection/​mob attack perpetrated by thousands of President Trump’s supporters on January 6. The Overreaction is the request to TSA and the FBI by House Homeland Security Chairman Bennie Thompson (D-MS) that “all individuals identified as having entered the Capitol building” be placed on the “No Fly” list. The proposal is, of course, completely insane.

Don’t misunderstand me. I believe that anyone who engaged in violent acts at the Capitol on January 6 should be prosecuted the full extent of the law under existing federal statutes. What is clearly nonsensical and totally at odds with both the First and Fourth Amendments is the suggestion that just because someone was in the Capitol building at the time of they should automatically be placed on the “No Fly” list.

Should someone who violently broke windows or forced their way into the Capitol building after being warned to cease and desist by U.S. Capitol Police be barred from flying? Yes, because those acts are all violations of federal law. But what about the people who committed trespass on the Capitol that day without harming anyone? Should they also be placed on the “No Fly” list? Or even TSA’s Quiet Skies selectee list? No. The airlines and the FAA know how to deal with disruptive passengers, as the FAA’s warning earlier this week made clear.

What’s needed right now is a reminder that every time a major, security‐​related national trauma takes place—the Pearl Harbor attack, the 9/11 attack, and now the Capitol insurrection/​mob attack by thousands of Trump supporters—the public inevitably demands that Congress “do something” in response, and that congressional response is almost always something the nation regrets later. Just for once, can we actually think before we act?

This article by Patrick G. Eddington originally appeared in the CATO at Liberty blog.