Nonfiction Flashback: Why the Imperial Japanese Navy Attacked the port of Darwin 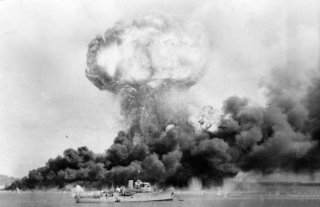 Here's What You Need to Remember: During World War II, the Empire of Japan was able to advance as far south as New Guinea and even occupied two Aleutian Islands—Attu and Kiska—to divert American forces away from its attack on Midway. The two islands were the only U.S. territory to be occupied during the World War II, but it was just one of a handful of Japanese campaigns that highlighted the great reach the Japanese Empire was able to extend from its homeland.

While Japanese military planners knew that a full-scale invasion of Australia was impossible given the size of the country, in February 1942 the Imperial Japanese Navy launched a raid on the port of Darwin. The city was a small town with limited civil and military infrastructure, but the raid was a devastating blow and was the largest single attack ever mounted by a foreign power on Australia. More than 242 aircraft, in two separate raids, attacked the town as well as ships on the harbor. It was actually the first and largest of more than 100 air raids against Australia.

Yet, the bombing of Darwin wasn't even the boldest or most distant raid the Japanese conducted.

Just over a month after the raid on Darwin, the Imperial Japanese Navy conducted the Indian Ocean Raid, which involved six aircraft carriers, four battleships, seven cruisers, and 19 destroyers under the command of Vice-Admiral Chuichi Nagumo. From March 31 to April 9 the Japanese fleet sailed into the Indian Ocean to destroy the remnants of the British naval power. This included attacking the main British fleet bases at Colombo and Trincomalee on Ceylon followed by sweeps of the Bay of Bengal.

The British heavy cruisers HMS Dorsetshire and HMS Cornwall were sunk, along with the outdated British light carrier HMS Hermes, and the Australian destroyer HMAS Vampire. It was a devastating loss for the Allies, while the Japanese losses were just 18 aircraft.

The raid forced the British Eastern Fleet to fall back to East Africa, but more importantly, it was largely intact.

The Royal Navy's Admiral Sir Geoffrey Layton, commander-in-chief at Ceylon, even feared the island would be a target of invasion, but the truth was that the Japanese lacked the resources for such an invasion. But the raid highlighted Japanese naval power at that stage in the war. Nagumo's carriers returned to the Pacific to prepare for the campaigns that would turn the tide – including the Battle of the Coral Sea and decisively the Battle of Midway. From that point on Japan's fortunes turned and the Indian Ocean remained largely safe from Japanese attack.

Because Nagumo had failed to destroy the British Eastern Fleet it was still capable on May 5, 1942, when its ships supported the invasion of Vichy French Madagascar, the first successful Allied invasion of the war. It has also been argued that the Indian Ocean raid gave the U.S. Navy the necessary breathing space to recover from Pearl Harbor and buttress its strength for the coming engagements with the Japanese Navy.

While the Japanese had seemingly scored a great victory in sinking two cruisers and a carrier these were far from the most modern ships, and perhaps it added to Nagumo's ego. He learned that the hard way in the battles to come.

Peter Suciu is a Michigan-based writer who has contributed to more than four dozen magazines, newspapers, and websites. He is the author of several books on military headgear including A Gallery of Military Headdress, which is available on Amazon.com. This article was first published earlier this year.