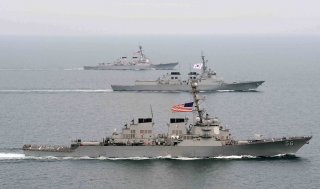 Here's What You Need to Remember: In particular, the U.S. Navy is worried about swarm attacks, given that Iran will also use flotillas of small, fast boats to take on American warships in the narrow waters of the Persian Gulf. The navy recently test-fired a modified U.S. Army Hellfire antitank missile, reconfigured as an antiship missile, from a Littoral Combat Ship.