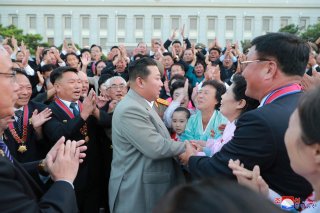 Here's What You Need to Remember: The government, in recent months, has been pushing the line that Kim is healthy and that his weight loss "shows him suffering alongside his people, who are struggling with chronic food insecurity made worse by the effects of a prolonged coronavirus pandemic.”

An odd story emerged out of North Korea earlier this summer: A lot of observers of that country began to notice that leader Kim Jong-un had dropped a noticeable amount of weight.

There was a series of stories about this in early June, with North Korea experts weighing in that Kim’s more svelte figure could strengthen his position if it meant he was in improved health but could hurt him if the weight loss was as the result of any type of illness. The weight loss has also coincided with reports of starvation in North Korea, something that the regime has not exactly denied.

Now, the regime has warned North Koreans not to speculate about Kim’s weight.

According to Radio Free Asia (RFA), which cited sources in the country, the regime has warned citizens to refrain from speculation about the leader’s weight, letting it be known that doing so will be seen by the regime as a "reactionary act.”

The government, in recent months, has been pushing the line that Kim is healthy and that his weight loss "shows him suffering alongside his people, who are struggling with chronic food insecurity made worse by the effects of a prolonged coronavirus pandemic.”

“As stories of health problems related to the Highest Dignity’s weight loss spread among the residents, many of the neighborhood watch units here in Chongjin made official statements to the people at their weekly meeting, saying that it is a ‘reactionary act’ to talk about the leader’s health,” a North Korean resident told RFA this week.

“The neighborhood watch units also said the sudden weight loss is not due to a health problem, but rather that he is suffering in solitude for the sake of the country and people in crisis.”

The source also noted that there has been little acknowledgment from the regime about the weight loss until now.

“This is the first time that authorities have felt the need to officially explain through neighborhood watch units in every region that the Highest Dignity has no health problems,” that person told RFA.

“Although Sariwon did not convene an emergency meeting of residents to reassure them that the Highest Dignity is healthy, it did caution people in neighborhood watch meetings not to mention his health,” the source from North Hwanghae province told the publication.

“They emphasized that it is prohibited to share any stories about the health of the leader, who they said had become emaciated due to the piling up of national affairs. But public suspicion that he has health problems has not subsided.”

RFA also published an editorial cartoon, depicting a young, shirtless, malnourished boy crying while he envisions a piece of chicken, while Kim stands next to him, holding an oversized pair of pants while sporting a sash that says “Weight loss success.”