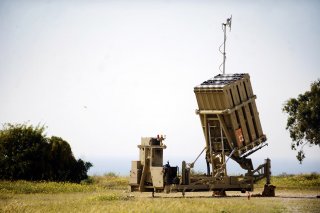 The Pentagon has had a longstanding concern that many of its airplane and equipment basing locations in the Pacific theater could be vulnerable to Chinese land-fired ballistic missiles. Of course, this pertains to bases in places like Japan and Australia but also, perhaps even more significantly, in the U.S. territory of Guam in the region which can base B-2 Spirit bombers, F-22 Raptor jets, F-35 fighter jets and other crucial assets of great consequence in the region. Chinese ballistic missiles, many of which can fire from concealable mobile launchers and travel distances greater than one thousand nautical miles, could possibly hold Guam and other U.S. allied locations at risk.

The Defense Department has based a range of missile defense technologies in the Pacific region, including the ballistic-missile intercepting Terminal High Altitude Area Defense and other interceptor weapons designed to track and take out incoming enemy ballistic missiles.

Now, the Defense Department is sending its first cutting-edge Iron Dome missile defense technology to Guam. Perhaps military leaders decided to do this due to the growing tensions in the region and the rapid arrival of new Chinese precision-guided weapons.

Army Maj. Gen. Brian Gibson, the director of the Air and Missile Defense Cross Functional Team for Army Futures Command, told the National Interest that the first Iron Dome battery became operational in September of this year and the second one is slated to arrive in December. The Iron Dome fills a critical defense gap for U.S. Air and Missile Defense efforts in the region, he said.

“There may never be enough to protect everything, so we prioritize what is most important in terms of operational capability,” Gibson said.

The much-discussed Rafael-Raytheon Iron Dome System fires a Tamir missile to knock out attacking threats from the sky from as far away thirty miles or more, using radar and electro-optical sensors.

Iron Dome brings mobile, ground-fired drone, mortar and artillery defenses. The system could defend a specific area from armored convoys on the move or from incoming enemy fire by finding and “knocking out” approaching artillery or drones. The Iron Dome’s Raytheon and Rafael-built Tamir uses steering fins and a proximity fuze, according to an information sheet on Raytheon’s website.

“Iron Dome detects, assesses and intercepts a variety of shorter-range targets such as rockets, artillery and mortars,” according to the website. “It is effective day or night and in all weather conditions including low clouds, rain, dust storms and fog. It features a first-of-its-kind multi-mission launcher designed to fire a variety of interceptor missiles.”

This technology is significant because it enables the Tamir missile to explode near a series of approaching enemy munitions or drones to ensure a “kill” of otherwise somewhat elusive or maneuvering targets.

Additionally, the Iron Dome can be used to protect forward operating bases as a “ready now” technology designed to stop enemy attacks from damaging buildings that harness U.S. forces, headquarters and weapons. In fact, the system can complement several existing and emerging protection programs.