North Korea Is Now Applying Its Very Own Maximum Pressure 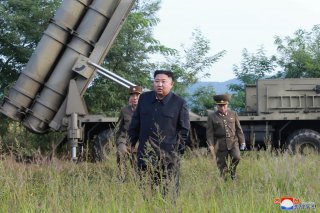 Pyongyang is putting pressure on South Korea through increasingly acerbic means, including aggressive missives, breaking off communications, and threatening to take future steps against its “enemy” to the south.

Kim Yo Jong, the sister of North Korean leader Kim Jong Un, is behind these actions. She recently was made responsible for overseeing North Korea’s relations with the South, adding weight to speculation that she has been chosen as her brother’s successor.

Police then prevented South Korean groups and North Korean defectors from launching balloons carrying leaflets, rice, and Bibles. Seoul acknowledged that the activists were exercising their right to free speech, but vowed to submit legislation to “crack down” on the leaflet flights.

Despite South Korea’s acquiescence, North Korea has cut  all communications with Seoul, including senior-leader links between the South Korean presidential Blue House and North Korean Central Committee, as well as military hotlines intended to defuse situations in the East and West Seas and the Inter-Korean Liaison Office in the North Korean city of Kaesong.

Pyongyang has made multiple promises to sever additional ties with its neighbor.

The regime threatened to scrap the 2018 inter-Korean Comprehensive Military Agreement, which Moon had hailed at the time as a major step in improving relations with Pyongyang.

Pyongyang declared it may dismantle the North-South Korean industrial park in the North Korean city of Kaesong. Kim’s regime also said that its South Korean-related projects will be transformed into “projects against the enemy.”

Last month, Seoul was considering the removal of sanctions it had imposed on North Korea in 2010, after the regime sunk a South Korean naval vessel, killing 46 sailors. Pyongyang has never apologized or acknowledged its deadly action.

The Moon administration also repeatedly offered economic incentives to Pyongyang, despite the fact that the regime continues to reject U.N. resolutions requiring it to cease missile and nuclear tests and to abandon its weapons of mass destruction programs.

The U.S. government became so concerned by the Moon administration’s unwise generosity that it reached out directly to Korean banks, business, and government agencies to remind them of the parameters of U.N. sanctions and U.S. laws.

The push to sever inter-Korean ties is being led by Kim’s sister, Kim Yo Jong.

It is ironic that the Moon administration is willing to go to such lengths, and to restrict domestic free speech, in order to engage with a regime that refuses to engage in dialogue. Meanwhile, Kim Yo Jong is advocating the cessation of all inter-Korean communications.

Pyongyang’s reversion to diatribes and diplomatic threats can serve several purposes. It could be to lay the groundwork for missile launches or the unveiling of a new strategic weapon, which the regime had previously vowed to do.

Domestically, the manufactured crisis can distract from economic travails brought on by the regime’s failed policies, international sanctions, and self-imposed isolation measures to combat the COVID-19 pandemic.

Kim Yo Jong’s increasingly prominent role in recent months suggests the regime is burnishing her credentials as a successor to Kim Jong Un. His recent extended absences from public view resurrected speculation of health issues.

The inclusion of her statement in the authoritative Rodong Sinmun newspaper, usually reserved for those of the North Korean leader, and subsequent mass public rallies in support both reflect her growing authority.

The regime has been increasingly disdainful and insulting to Moon. In January, North Korea dismissed Seoul’s “frivolous” and “presumptuous” attempts at playing mediator between Pyongyang and Washington.

Last August, a North Korean ridiculed Moon’s offer of peace and reconciliation contained in his Liberation Day speech as “remarks that make the boiled head of a cow provoke a side-splitting laughter.”

North Korea may seek to justify forthcoming regime actions. Kim Yo Jong denounced the leaflet campaign as a hostile act that violates the peace agreements that banned hostilities against each other, which the Korean leaders signed during a summit meeting in 2018.

The regime may attempt to capitalize on growing tensions between Washington and Seoul over stalled negotiations to determine the amount South Korean will contribute for the cost of stationing U.S. forces on the peninsula.

Recent reports that the U.S. will remove a significant number of troops from Europe, and President Donald Trump’s previous vows to do the same from South Korea, give North Korea an opportunity to drive a wedge between the allies.

The Korean Peninsula, which has been quiescent in recent months, is likely to become tenser in coming weeks and months.

This article by Bruce Klingner first appeared in The Daily Signal on June 10, 2020.