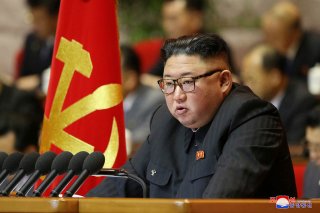 The “hermit kingdom” of North Korea has struggled to feed its own people in recent years, let alone sustain its energy needs. Yet with reports emerging of the hard-line Communist state’s potential oil and gas resources, South Korea and other U.S. allies in the region may soon face a far more capable military adversary.

Writing in the petroleum geoscience publication GEOExPro, exploration consultant Mike Rego suggests that the secretive Asian state offers “good hydrocarbon potential, both on and offshore…for those who are prepared to take ‘first mover advantage’ the rewards are there to be had.”

Rego points to the “relatively low cost and low risk exploration opportunities in a low competition environment, with nearby energy-hungry markets” as adding to the exploration potential.

North Korea is currently reliant on Chinese and Russian fuel imports, which Rego considers surprising given the “abundant evidence for the presence of working hydrocarbon systems both onshore and offshore, and past exploration efforts dating back to the 1970s.”

The state reportedly has seven underexplored geological basins, with three basins said to have “proven working petroleum systems,” although only twenty-two wells have been drilled.

Rego identifies the offshore West Korea Bay Basin and East Sea Basin, along with five onshore basins as offering exploration potential. According to Rego, the West Korea Bay Basin has seen the most foreign involvement, principally Chinese and Russian. At least ten exploration wells have been drilled in the West Sea, with some showing “good oil shows” along with the identification of a number of potential reservoirs.

“The West Sea definitely has oil, and has flowed oil at reasonable rates from at least two exploration wells when they were drilled and tested in the 1980s,” Rego told NK News.

Meanwhile, the East Sea has seen Russian exploration efforts previously including the drilling of two wells, “both of which encountered encouraging shows of oil and gas.”

Onshore, the author states there has been little exploration to date, apart from efforts by the Korean Oil Exploration Corporation and also recently by Mongolia’s HBOil JSC (HBO). Among five main onshore sedimentary basins, the largest is south of the capital, while unconfirmed reports point to a 1-trillion-cubic-foot (tcf) discovery in 2002. (In the United States, 1 tcf is sufficient to heat fifteen million homes for a year).

“Most have signs of oil and/or gas. [They would be] relatively cheap to explore, [the] major issue is logistics, and shooting more seismic prior to drilling, although it should be possible to do so without relying on too much advanced technology. The Zaeryong Basin is probably the most likely to have oil,” Rego told NK News.

In 2013, HBO reportedly acquired a 20 percent stake in the North Korean entity operating its Sungri refinery, with the goal of exporting crude to Mongolia. Located in the special economic zone of Rason City, the refinery has a capacity of two million tons a year and is connected to the Russian railway system.

“Mongolia has had diplomatic relations with North Korea for many years,” Ulziisaikhan Khudree, HBOil’s chief executive officer, told Bloomberg News. “There are certain risks, but other countries do business with North Korea so I am quite optimistic the project will be successful.”

In July 2014, NK News reported that HBO planned to open up a data room on the nation’s oil and gas sector to interested parties, in hope of attracting outside investment. A British geologist, Quentin Rigby, reportedly was employed to assist the process under the management of KOEC International Inc, the international subsidiary of North Korea’s state-run oil company.

According to the report, HBO’s onshore interests lie southwest of Pyongyang in the Zaeryong Rift Basin, with the Mongolian company seeking to gain access to both upstream oil and gas production and downstream refinery capacity.

However, Australian, British, Malaysian and Singapore-based firms have reportedly also previously investigated North Korea’s energy potential, with Australia’s Meridian Oil becoming the first Western firm to obtain an exploration license in 1990. However, after Meridian’s seismic data was sent to a London processing center, North Korea reportedly failed to pay for the processing and the exploration effort failed to progress further.

London-based Aminex also reportedly signed a deal with North Korea in 2004, which it subsequently withdrew from in 2012, citing the “volatile and unpredictable politics of the area.” Notably, Rego reportedly served as an exploration consultant for Aminex on its North Korean investment.

However, the lack of recent reported investment suggests Western companies have been reluctant to invest in the totalitarian state, which remains subject to international sanctions over its nuclear weapon and ballistic missile programs from the United Nations, as well as from the United States, Britain, Canada, China and Japan.

“Any input for this oil and gas exploration, development, and upgrading the refineries in [North Korea] will be seen as softening the current sanction scheme against (it),” Dr Keun-Wook Paik, associate fellow on energy, environment and resources at London’s Chatham House, told NK News.

“It can deliver a wrong signal to the money chasers and the U.S., Korean and Chinese authorities will be determined to stop the large scale capital injection to DPRK under the current situation,” he added.

The Communist state has long sought overseas assistance in developing its oil and gas industry, but no foreign firm has gone beyond an initial exploratory interest.

“They don’t have the expertise and technology to extract the oil and gas themselves, nor the money to pay for someone else to do it, and, given past history [and current low oil prices], are having a hard time finding someone to take a flyer on looking for oil and gas,” David Von Hippel, senior researcher at the Nautilus Institute for Security and Sustainability, told NK News.

Yet despite the risks, some foreign firms are taking an interest. China Railway Investments Group has announced plans for a large-scale investment in the state, including in the oil and gas sector, in conjunction with a Singaporean investment group owned by North Korea.

According to the U.S. Energy Information Administration, North Korea still has no proven oil reserves or petroleum or other liquids production. Oil consumption reportedly dropped from 76,000 barrels per day in 1991, when it received cheap oil from China and the Soviet Union, to just 17,000 barrels in 2013, while its crude refinery utilization is just 20 percent of its 64,000 barrels a day capacity.

In coal however, North Korea had estimated reserves of 661 million short tons in 2011, and its coal exports, mainly to China, account for 10 percent of gross domestic product.

Along with the political barriers, the regime also faces an economic barrier to greater investment due to the recent downturn in prices. U.S. crude prices hit a six-year low of $37.75 a barrel in August, and according to analysts, prices could drop further due to current oversupply.

“The downturn is at 400 days and counting, well over double the previous downturn in December 2008 which was about 150 days,” Deloitte Australia’s national director, oil and gas, Geoffrey Cann, told the Queensland Petroleum and Exploration Association on November 10 of 2015.

“But pricing hasn’t turned around yet, and all the signs suggest that we won’t see a reversal anytime soon. The volume overhang of 1 million barrels per day of oil production hasn’t gone away, producers are pumping furiously, and there’s a vast inventory of oil in storage that will be released to the market at the first signs of recovery.”

The casualties of the oil downturn have included Canadian oil sands, North American shale and North Sea oil, with energy companies canceling an estimated $1.5 trillion worth of projects.

Gas prices have also declined as the gas market faces a global supply glut. According to researcher Wood Mackenzie, an additional 130 million tons per year of liquefied natural gas (LNG) will hit the market in the next five years, dampening the likelihood of major new LNG projects.

“The LNG market is facing another oversupply which is likely to be deeper and will persist for some years. Prices in Asia will be lower than in Europe, and at their worst, between 2017-19, while prices in Europe will not reach a low point until 2020. The key question the industry is wrestling with is: how low will prices go?” Wood Mackenzie’s Noel Tomnay asked in an October 27 statement.

The prospect of the North Korean military having access to plentiful new supplies of oil and gas will send shivers down the spine of governments from Seoul to Tokyo and beyond. Fortunately, it appears the regime’s goal of opening up its reserves appears just a pipe dream for now.

North Korea's Kim Jong-un a Trillionaire? His Nation Is Loaded in Resources