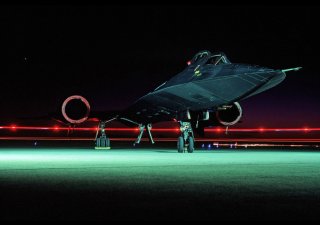 Here's What You Need to Remember: The following month, the Assistant Secretary of Defense visited their detachment, and told them that the president was “furious” that the North Koreans had fired. For a time, they ran their missions 30 miles south of where they normally had, but resumed their normal path soon after.

North Korea recently undertook a pair of missile launches, including a ballistic missile launch that got the attention of the Western world. Much of the media coverage of those launches have pointed out that the North Korean regime has often launched provocations shortly after the arrival of a new president of the United States.

One of the times they did that was in 1981, shortly after the election of Ronald Reagan. And a former SR-71 Blackbird pilot told the story in an interview last year of a close call with North Korea, nearly 40 years ago.

Pilot BC Thomas, last year, gave an interview to Hushkit about his experiences flying the SR-71 Blackbird.

The SR-71, famously, was never shot down in its entire lifespan. But in that interview, Thomas told a story about a time it was fired upon.

It was August 25, 1981, and Thomas described it as “the last known missile launch against the SR-71.” The planes were flying above North Korea, as they often did over the Soviet Union, Cuba, or other countries.

Of that 1981 mission, which Thomas called his most memorable, “this was just after President Reagan was elected, and North Korea was sending a message to the new, incoming administration that our flying reconnaissance near/over their territory was unacceptable. The Communists sent this message the next day specifically mentioning our flight.”

Thomas and the other pilots laughed at the Russian telegram, but on August 25, they had a close call.

“Maury Rosenberg (pilot) and Ed McKim (RSO) were flying a 2-loop (our moniker for a mission involving two refuelings) reconnaissance mission, first against Communist China and then North Korea,” he said in the interview. “The pass across North Korea was along the Demilitarized Zone (DMZ) between North and South Korea, although North Korea claims sovereignty over South Korea as well. On the second pass, the North Koreans launched a surface-to-air (SAM) SA-2 missile in an attempt to shoot-down the SR-71. They missed by several miles.”

The following month, the Assistant Secretary of Defense visited their detachment, and told them that the president was “furious” that the North Koreans had fired. For a time, they ran their missions 30 miles south of where they normally had, but resumed their normal path soon after. Then, in late October of 1981, they ran the same mission they had when the missile was shot, but the North Koreans did not fire again that time.

Thomas also discussed various “myths” about the SR-71. It could not, in fact, fly in space. It was not true that “crew members had to be married because we would be more prone to defect to the Soviet Union if we were not.” And no, the plane could not outrun a missile.