North Korean Nukes? The U.S. Army Has a Plan to Deal With Them. 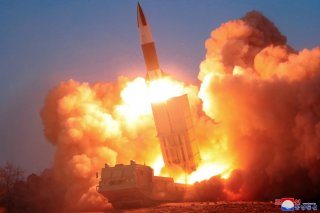 Here's What You Need to Know: The Army places special emphasis on reconnaissance and intelligence collection to identify WMD sites.

In 2017, the Pentagon released a new manual that lays out how the United States might destroy North Korea’s nukes.

On crossing PL Yak, Bravo Troop identifies an abandoned factory. Bravo Troop sends a size, activity, location, unit, time, and equipment (SALUTE) report to the squadron tactical command post and receives orders to establish an outer cordon to isolate the factory. The CBRN R&S platoon detects a chemical signature consistent with a nerve agent emanating from one of the factory warehouses. No personnel are in sight. The squadron headquarters sends their CBRN 4 report from the CBRN R&S platoon to the BCT. The BCT orders the squadron to establish a perimeter and continue observation while the BCTs CBRN R&S platoon (light) is moved forward to assist in assessing this emerging WMD objective. Squadron personnel brief the CBRN R&S platoon on their observation from the factory. The squadron headquarters orders Alpha Troop to clear and seize the factory. Alpha Troop dons protective gear and thoroughly clears the factory to ensure that there is no enemy present. Forward security elements report seeing a suspected cache of 122-mm rockets in the suspect warehouse. Alpha Troop marks the area, completes clearing the site, and withdraws to positions that allow it to secure the area in question while the R&S platoon conducts an Assessment.

This article appeared earlier in 2018.