This North Korean Submarine Is a Rusty Mess...But It Can Kill a Warship 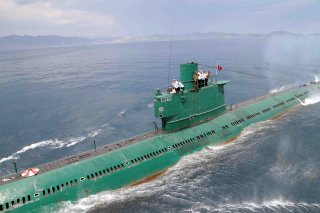 Here's What You Need To Remember: North Korea’s reliance on submarines exposes a harsh reality for the country: U.S. and South Korean naval and air forces are now so overwhelmingly superior that the only viable way for Pyongyang’s navy to survive is to go underwater.

A substantial number of these sailors serve in the KPN’s submarine fleet, which is one of the world’s largest. In 2001, North Korea analyst Joseph Bermudez estimated that the KPN operated between fifty-two and sixty-seven diesel-electric submarines. These consisted of four Whiskey-class submarines supplied by the Soviet Union and up to seventy-seven Romeo-class submarines provided by China. Seven Romeos were delivered assembled, while the rest were delivered in kit form. Each Romeo displaced 1,830 tons submerged, had a top speed of thirteen knots and was operated by a crew of fifty-four. The Romeo submarines were armed with eight standard-diameter 533-millimeter torpedo tubes, two facing aft. North Korean leader Kim Jong-un was filmed touring and taking a short voyage on a Romeo-class submarine in 2014.

In March 2010 the corvette ROKS Cheonan, operating in the Yellow Sea near the Northern Limit Line, was struck in the stern by an undetected torpedo. The 1,500-ton Cheonan, a Pohang-class general-purpose corvette, broke into two halves and sank. Forty-six South Korean sailors were killed and fifty-six were wounded. An international commission set up to investigate the incident pinned the blame on North Korea, in large part due to the remains of a North Korean CHT-02D heavyweight acoustic wake-homing torpedo found at the location of the sinking. The submarine responsible is thought to have been a Yono-class midget sub.

Look Out for North Korean Nuclear Test as Isolation Grows