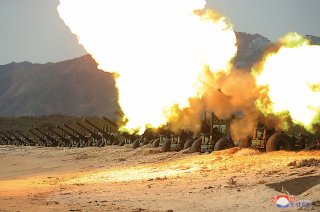 Here's What You Need to Remember: North Korea’s forward-deployed ground forces likely include most if not all of the KPAGF’s more than 14,000 artillery systems, including an estimated 8,600 artillery pieces and 5,500 multiple rocket launchers (MRLs). The proximity of these weapons to the border with South Korea places them in range of a number of important military targets and population centers including the Seoul metropolitan area and its over 25 million inhabitants.

While North Korea’s Korean People’s Army (KPA) remains qualitatively inferior to the armed forces of both South Korea and the United States, it employs a number of capabilities that would allow it to inflict a large number of civilian and military casualties in the event of either a major war or a more limited conflict on the Korean Peninsula. Perhaps none of North Korea’s military assets exemplify this more than its large numbers of forward-deployed artillery pieces.

The KPA Ground Force (KPAGF) is believed to have roughly 70 percent of its active-duty forces forward deployed to within approximately sixty miles of the Demilitarized Zone (DMZ). By forward deploying such a large segment of its military forces, North Korea is better able to launch rapid, surprise attacks against South Korea should a military conflict break out. In keeping with North Korea’s recognition of the military situation on the Korean Peninsula, an attack by the DPRK would likely involve an early attempt to overwhelm and breakthrough U.S. and South Korean forces through simultaneous attacks along the front and rear in an effort to defeat and occupy the South before the arrival of U.S. reinforcements. This would include an effort to inflict as many casualties and as much physical and psychological damage as possible.

North Korea’s forward-deployed ground forces likely include most if not all of the KPAGF’s more than 14,000 artillery systems, including an estimated 8,600 artillery pieces and 5,500 multiple rocket launchers (MRLs). The proximity of these weapons to the border with South Korea places them in range of a number of important military targets and population centers including the Seoul metropolitan area and its over 25 million inhabitants. These weapons would be capable of inflicting a tremendous number of casualties, particularly if they were used as delivery mechanisms for North Korea’s large stockpile of chemical weapons that is estimated at somewhere between 2,500 and 5,500 metric tons. Much of North Korea’s artillery pieces are housed in Hardened Artillery Sites (HARTS), providing them some protection from adversarial artillery, air, and missile strikes.

North Korea’s artillery would factor into an invasion of the South, supporting North Korea’s overall military strategy that calls for a quick victory by helping to support the rapid offensive and breakthrough that such a strategy relies on. Given its capacity for destruction, North Korean artillery would also be a central component of the DPRK’s campaign to inflict maximum human and physical damage that the North believes is an important element of shortening a potential conflict. Beyond its utility in an open conflict, its artillery provides North Korea with some amount of flexibility; depending on the weapons used and the intensity of a bombardment, artillery can be used as a means to retaliate against South Korea or as a tool for conflict termination, as well as an effective means for coercion and deterrence of the U.S.-ROK Alliance.

North Korea’s artillery force is without a doubt one of if not the largest in the world. It is made up of a wide range of towed and self-propelled weapons systems of various calibers. Some element of North Korea’s artillery force is made up of dated systems the DPRK received from both the Soviet Union and China, while North Korea has also had success indigenously designing and producing artillery pieces such 152-millimeter howitzer-guns and 130-millimeter field guns.

Perhaps the most ubiquitous of all of North Korea’s artillery pieces is the M-1978 Koksan. First manufactured in the 1970s, the Koksan is armed with a massive indigenously produced 170-millimeter gun and is mounted on a T-54 or T-59 tank chassis. The Koksan possessed an initial range of about 43 kilometers, though the development of a rocket-assisted round has helped to increase its range to 54 kilometers. North Korea may also have developed a chemical round for use with the Koksan.

North Korea also operates a number of MRLs, including a range of 107-, 122- and 200-millimeter systems. The most prominent of North Korea’s rocket artillery pieces, however, are the M-1985 and M-1991 240-millimeter MRLs. Dating back to the mid-1980s and early 1990s, these systems are capable of launching roughly 85-kilogram rockets up to a range of 40 to 60 kilometers.

Artillery has remained a focus for North Korea, and in recent years the country has unveiled newly developed artillery pieces. During a 2018 military parade, North Korea unveiled a new 155-millimeter self-propelled artillery piece that appears to have been mounted on an elongated North Korean tank chassis. In addition, a new 300-millimeter MRL dubbed the KN-09 has been in development for several years, while additions to North Korea’s ballistic missile arsenal have been described by analysts as blurring the distinction between ballistic missiles and MRLs.